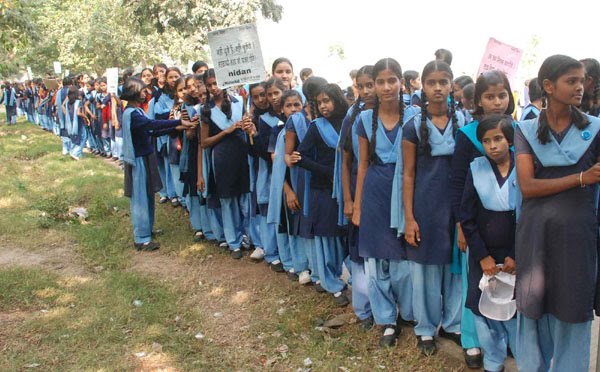 PATNA: The state government’s human chain programme against dowry and child marriages ran into controversy on Sunday after the officials were accused of misbehaving with the people for not joining the programme or not arranging for “good crowds”.

According to a report in the local media, a BDO in Begusarai district was allegedly beaten up by the villagers after he assaulted a tractor driver for not joining the queue. The incident took place in Bind Tola under Sahebpur-Kamal police station.

The tractor driver was on way when the BDO forced him to join the human chain but he refused. In a fit of rage, he assaulted the driver which angered the local villagers who reacted by assaulting the BDO, the ETV reported.

The BDO somehow fled the scene riding his bike.

Another such incident was reported from Supaul district where an SDO allegedly hurled abuses at a teacher after seeing poor participation of students in the human chain.

As per media reports, the Triveniganj SDO lost his cool when he saw negligible presence of students in a school.

The angry official later allegedly hurled abuses at the teacher which blown into a major issue. Reports said the infuriated teachers’ association reacted by shouting slogans against the SDO and launching an agitation against him for his misconduct, according to an ETV report.

Bihar today formed a human chain against dowry and child marriages but there are reports of missing enthusiasm among the masses and less participation of people in the event in the rural areas.

The ruling party leaders, however, claim more than four crores people participated in the event and it was a great success.

Nitish had sought for ‘Z’ plus security even five months before attack on his convoy!