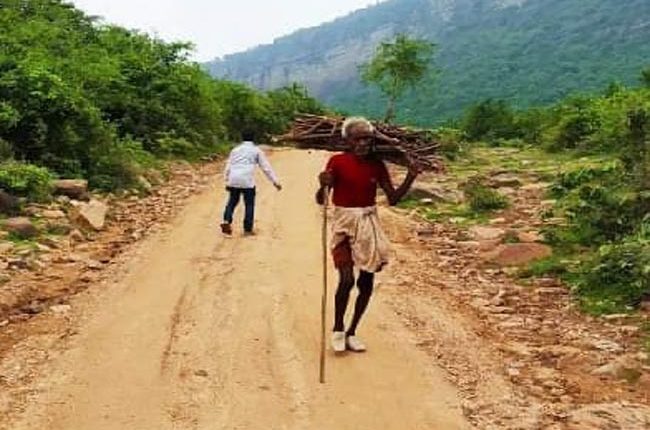 PATNA: Spirited villagers in Bihar tore apart a rocky hills to carve out a 2.5 kilometer-long road so that the devotees could reach a famous temple of Goddess Durga located atop the inaccessible hills.

The route leading to Tutla Dham, a temple dedicated to Goddess Durga located atop a picturesque hill in Tilauthu block of Rohtas district, was indeed very tough and full of troubles.

The villagers and devotees had to cross at least three rivers and trek for long to reach the temple.

Local villagers appealed to the authorities several times to construct a road to reach the temple but none took any notice of their request. So finally, they decided to construct the road themselves.

Eventually, the villagers constituted Tutla Dham Vikas Samiti and went on cutting the rocky hills to carve a road through it and after two years of hard works, they finally were able to construct a 2.5 km-long motorable road leading to the temple. The construction of the road has made journey very easy now.

“We faced many obstacles on our way but didn’t lose our patience and ultimately achieved the task. Now we are very happy,” Samiti’s president Gurucharan Yadav told the media.

The historic temple located atop the hills has been attracting hundreds of devotees every year for its picturesque surroundings and lovely waterfall.

A similar feat had earlier been achieved by “mountain man” Dashrath Manjhi who had literally moved a huge rocky mountain single-handedly in Gaya district of Bihar to carve out a road in order to fill happiness in the life of others.

Manjhi who died in 2007 fighting the deadly cancer had cut through a rocky mountain constantly for over two decades to make a way for others after his wife Falguni Devi died for want of timely medical help owing to lack of road in 1960’s.