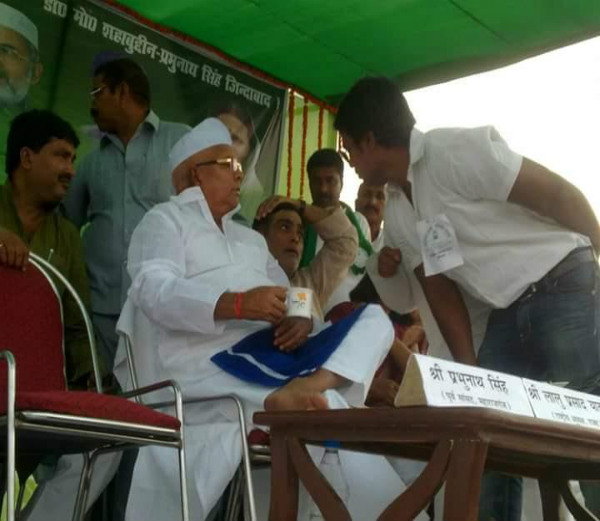 PATNA: A photograph of a murder case suspect with RJD president Lalu Prasad has gone viral in the social media.

The alleged suspect Javed is wanted by the CBI in the connection with the murder of Siwan journalist Rajdeo Ranjan. He is currently absconding.

In the photograph, the alleged shooter is seen engrossed in discussion with the RJD chief at the dais with another leader Ram Kripal Yadav sitting behind, indicating the photograph is at least two-year-old. Yadav is currently with the BJP.

The photograph was apparently shot during a RJD function.

Earlier, Javed along with another alleged shooter Mohammad Kaif who now has surrendered in the court was spotted with both of Prasad’s sons, Tej Pratap Yadav and Tejshwi Yadav, both ministers in the Nitish Kumar government in Bihar, as well as BJP leaders.

The close relations of the murder accused with the politicians have reportedly stunned the CBI which is currently probing the journalist murder case. The CBI is at presently in Siwan investigating the case.

Journalist’s widow Asha Ranjan has already filed a case in the Supreme Court, demanding to transfer her husband murder case to the apex case on the ground that the accused has close links with the ruling party politicians and hence she may not get a fair trial.

Rajdeo, a senior journalist working with a prominent Hindi daily, was shot dead by motorcycle-bone criminals in May this year. The investigating agencies have arrested the alleged shooters in the case but the victim’s family says the “real conspirator” is someone else.