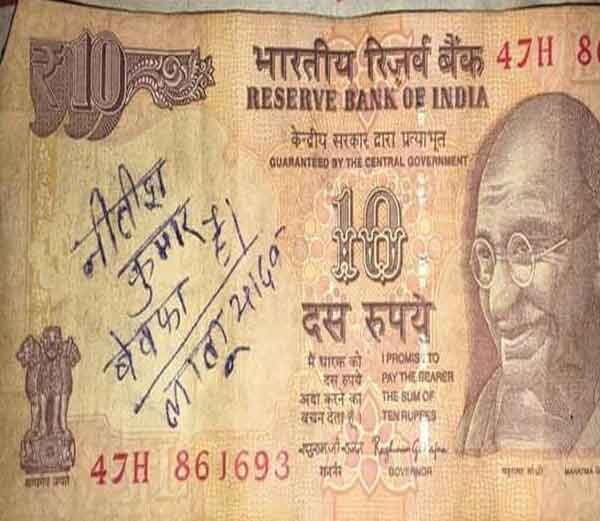 PATNA: A Rs10 currency note with “Nitish Kumar bewafa hain” (Nitish Kumar is unfaithful) written over it has suddenly gone viral in the social media after the Bihar chief minister was seen moving slowly closer to the BJP.

Kumar had come to power with the support of the RJD and the Congress but now looks extending hands of friendship to the BJP once again, leading to such message.

The move reminds the “Sonam Gupta bewafa hai” story which too went viral in the media just when the Narendra Modi government launched the demonetization drive earlier this month.

It’s not confirmed as to who, as such, penned this message over the currency note but a look at the note says someone claiming to be Lalu Yadav has left this remark—a move which has been stoutly denied by the RJD which describes it as the “mischief” some shrewd elements.

The “message” on the currency notes assumes significance given the fact that Kumar, of late, looks to be coming closer to the BJP although he has denied this in public.

The growing proximity between the BJP and the JD-U was clearly visible on Saturday when the chief minister came out in open support of the currency ban and also announced to stay away from the opposition-sponsored “Bharat Bandh” even as both his alliance partners, RJD and the Congress, protested demonetization.

Kumar’s announcement came amid reports that he had talked to the Prime Minister Narendra Modi over phone and also met BJP Amit Shah although the Bihar CM denies it, describing it as a part of deep-rooted conspiracy to eliminate him politically.