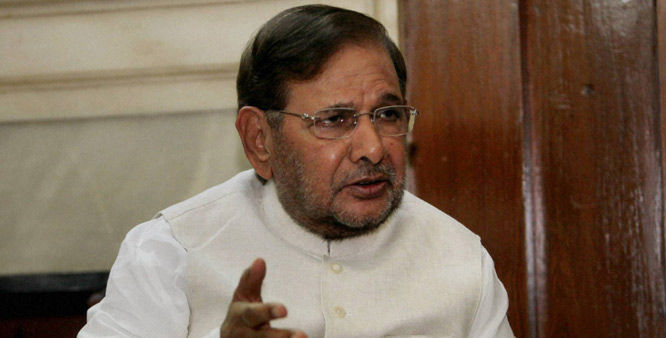 The JD-U leadership is angry at the way Yadav, Rajya Sabha Member, is not supporting Nitish Kumar’s new alliance with the BJP and has also planned to hold a seminar against communalism in Delhi on August 17, two days ahead of JD-U’s national executive meeting in Patna.

“The party has sent Sharad ji to the Rajya Sabha so he should respect the wishes of the party. JD-U has a base in Bihar and Nitish ji is our icon. If Sharad ji wants to challenge the party, he should do so in Bihar. Sharad ji could differ on issues but politics cannot be a means to accumulate property. Lalu Yadav had nominated Pappu Yadav to contest against him (Sharad), this shows how much RJD chief respects him,” JD-U spokesman Neeraj Kumar was quoted as saying by the India TV.

Another JD-U spokesman Sanjay Singh launched even bitter attacks on Yadav for taking a different stand from the party.

“By supporting the RJD and Congress-led Mahagathbandhan in Bihar, Sharad Yadav is compromising with corruption,” Singh told the media tdoay.

He alleged the name of Yadav also figured in the ‘hawala scandal’ earlier.

The developments indicate Yadav has charted out his own course of action and that the split in the JD-U is inevitable.

Yadav is said to be miffed with the move of the chief minister and described it as a misuse of people’s mandate given in favour of the Grand Alliance.

Quite many JD-U MPs, state party presidents and scores of senior party leaders too have expressed anguish over Kumar’s reported unilateral move to walk out of the Grand Alliance and form the government with support from the BJP which had got the mandate to sit in the opposition.

The Grand Alliance comprising the RJD, JD-U and the Congress had won 178 seats against only 53 bagged by the BJP despite all the efforts and resources pumped in by the Prime Minister Narendra Modui and BJP chief Amit Shah who virtually camped in Bihar all through the month-long Bihar elections in 2015, experts say.