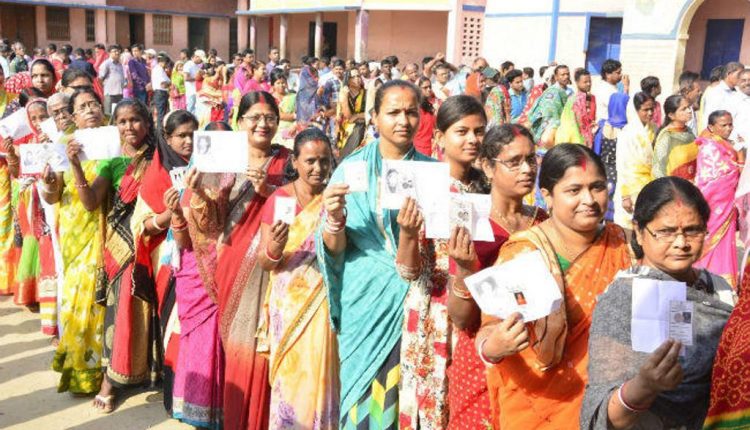 Women voters turning up in large numbers at a polling booth in Bihar to cast their votes in the second phase IMAGE COURTESY: SUPPLIED
238
Share

PATNA: An estimated 62.52 percent voters cast their votes in the second phase of polling in Bihar which passed off peacefully.

A total of five Lok Sabha constituencies went to poll in the second phase. They included Kishanganj, Katihar, Purnia, Bhagalapur and Banka located in eastern region of Bihar, also known as “Seemanchal”.

An important thing about these constituencies is that the JD-U is contesting on all five seats while both the BJP and the LJP have no candidates trying their luck from there. From Grand Alliance side, Congress and the RJD are contesting from these seats.

In the last LS polls, the BJP had failed to open its accounts on these seats even at the peak of Narendra Modi wave and hence it has offered all these seats to the JD-U headed by chief minister Nitish Kumar.

Of the five seats, Bhagalpur and Banka are held by the RJD, Kishanganj by the Congress and Katihar by the NCP while Purnia is represented by the JD-U.

What is special about the second phase is that the JD-U which Kumar heads is contesting on all the five seats located in the eastern zone having sizeable Muslim population.

In the last LS polls, the BJP had failed to open its account in this region and hence has offered all these seats to the JD-U, its new ally, to contest this time, hoping to bank on the personal image of the chief minister.

All these seats were won by the NCP, Congress, RJD or the JD-U which was not a part of the NDA in the last LS polls.

This time, however, the whole scene is different. On most of the seats, the JD-U is locked in a straight fight with the Grand Alliance candidates.

Of all, the contest is very interesting in Banka where the entry of BJP rebel Putul Kumari, widow of former union minister Digvijay Singh, has turned it triangular. She is locked in a fight with sitting RJD MP Jaiprakash Narayan Yadav and JD-U’s Girdhari Yadav.

In the last LS polls, she has lost the seat to the RJD candidate with just 10,000 votes yet the BJP didn’t give her ticket. An enraged Kumari is now contesting the elections as an Independent candidate and her move is all set to spoil chances of the NDA candidate.

ALSO READ: How Grand Alliance’s poll strategy has robbed off sleep of NDA in Bihar

In Bhagalpur, once BJP’s stronghold, the contest is between sitting RJD candidate Bulo Mandal and JD-U’s Ajay Mandal. Reports said here the RJD candidate has edge over his rival since the BJP cadres and workers have not shown interest in launching poll campaign for its ally as they were upset at gifting of this seat to the JD-U.

Even former Union minister Shahnawaz Hussain who had been contesting this seat for the three terms expressed anguish over the move and was never seen at that place ever. With the overall situation turning critical, the JD-U roped in the Prime Minister to address an election campaign at this place but the situation has hardly improved, reports said.

The contest is also triangular in Kishanganj and Katihar. In Kishanganj, the main contest is between Congress’ Md Javed and JD-U candidate Mehmood Ashraf but the entry of AIMIM candidate Akhtarol Imam has made its triangular.

In the last LS polls, Anwar had won this seat as a NCP candidate but later he quit the party to join the Congress. However, the contest is straight in Purnia between sitting JD-U MP Santosh Kushwaha and Congress candidate Uday Singh who resigned from the BJP just ahead of polls.