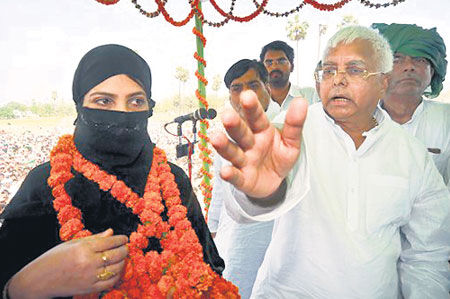 PATNA: Heena Shahab, wife of controversial RJD politician Mohammad Shahabuddin, has accused the ruling Nitish Kumar government in Bihar of settling a personal score with her husband for a 16-year-old incident.

Shahabuddin was sent back to jail last month as the Supreme Court cancelled his bail acting on an appeal of the Bihar government. He remained out of jail barely for 20 days. He had been granted bail by the Patna high court.

“The chief minister is taking revenge for my husband’s support to the RJD government as the Nitish Kumar government lasted for barely seven days in 2000,” she alleged.

“Nitish who was installed as the CM had failed to prove his majority in the House despite all efforts, and my husband had a key role in role. It seems Nitish has still not forgotten the incident,” she added.

She also accused the local Siwan district administration of submitting a false report to the state government.

She has also vowed to fight for her husband saying gross injustice has been done to him.

“Gross injustice has been meted out to my husband. Now, I will myself fight till he gets justice,” Heena who unsuccessfully contested two elections in the past told the media on Sunday.

Shahabudidn was sent back to jail on Friday after the Supreme Court cancelled the bail granted by the lower court. He enjoyed freedom for barely 20 days.

A pall of gloom has descended at Pratappur village, the native village of Shahabuddin in Siwan district, after he was asked to stay behind bars.

The usual bustle which had returned to the village after Shahabuddin’s release from jail is suddenly gone and an atmosphere of shock and grief has gripped the entire village.