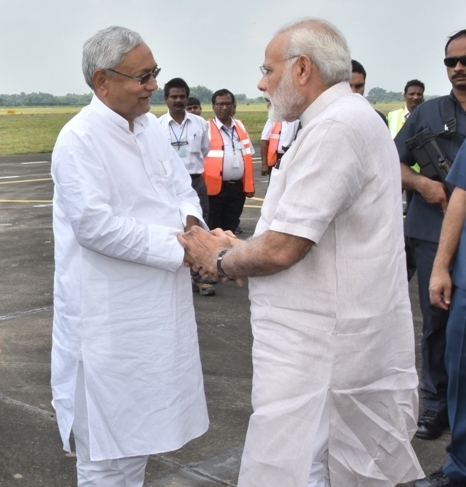 This was much on display on Monday when the chief minister heaped praises on the BJP government at the cente for being too “cooperative” towards Bihar.

“The attitude of the centre towards Bihar is very positive which will help accelerate the pace of development in the state,” Kumar told the media on the sidelines of weekly interaction with the masses on Monday.

In what appeared taking the BJP line, the chief minister clarified the proposed inauguration of works on road and other projects by the PM “is part of the Rs 1.25 lakh crore package”.

He also displayed no signs of displeasure over the centre’s delay in granting special category status to Bihar and then clarified he wouldn’t be taking up this matter during PM’s visit to the state on October 14 although he said the state would prosper if it was granted this status.

“Bihar is a landlocked state and unless special incentives are provided, investors will not invest here…but this issue is not listed for discussion during my meeting with the PM when the latter reaches here,” Kumar was quoted as saying in the local media today.

Bihar continues to have higher percentage of child marriage: CRY