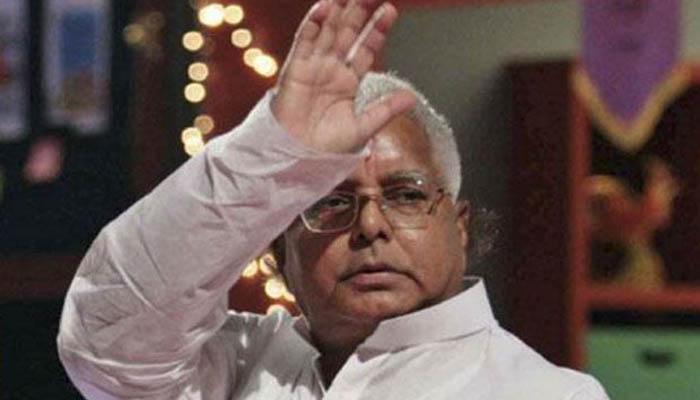 PATNA: Trying hard to water down controversy caused by remarks made by party leader Mohammad Shahabuddin, RJD president Lalu Prasd today said chief minister Nitish Kumar was the leader of the ruling grand alliance. Further, he blamed the media for the entire controversy.

“Nitish Kumar is the population leader of the alliance,” Prasad told the media in Patna today.

He expressed annoyance with party vice-president Raghuvansh Prasad Singh saying the latter had refused to listen to his advice despite all his best efforts.

“I have told him many a times to maintain restraint in his speeches but he has gone on biting slowly like ants,” he said, adding he would meet with the warring sides over the issue to know about the truth.

Earlier in the day, the Congress came out in open support of Bihar chief minister Nitish Kumar, daring the RJD to exit from the ruling grand alliance if it had any problem with the government.

“It’s not a good strategy to defame the chief minister while being in the government. The BJP is already thee to do that…Quit the alliance if you have any problem with the government. ,” Bihar state Congress Committee President Ashok Chaudhary told the media on Tuesday.

Chaudhary who is also the education minister in the government asked the coalition partners to work for strengthening the alliance, rather than weakening it.

“If you want to keep the alliance alive, behave properly. If not, you are free to quit,” he warned.

The Congress is apparently irked over the ongoing attack on the chief minister by the RJD leaders, such as Mohamamd Shahabuddin and Raghuvansh Prasad Singh.

The entire controversy got created after RJD politician Mohammad Shahabuddin said “Nitish Kumar is a chief minister by circumstances while his leader is Lalu Prasad”.

He also rejected Kumar being a “mass leader” saying the latter “can’t win more than 20 seats if he contests the elections alone.”

Shahabuddin has refused to withdraw his words saying he has no regrets about what he has said. “Jo bhi kaha soch-samajhkar kaha,” he said.

Nitish’s advice to tipplers: ‘Turn off lights and drink juice,’!