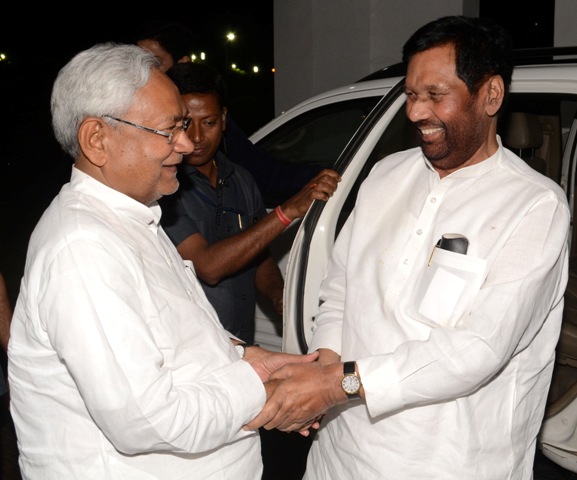 PATNA: A new political realignment appears to be in the offing in Bihar again with chief minister Nitish Kumar cosying up to once-his-arch-rival and Lok Janshakti Party (LJP) chief Ram Vilas Paswan.

In the past two months, both the leaders have met more than thrice, amply indicating something is cooking up between the two leaders.

Yesterday again, both the leaders met when the LJP chief rushed to the official residence the chief minister. As per the report, Paswan rushed to the chief minister to extend his invitation to attend a function being held by the LJP in Patna on 14 April to mark the birth anniversary of Dalit icon BR Ambedkar. This was for the first time that Paswan has invited Kumar at his party function.

The meeting between the two leaders assumes significance amid reports that both are not getting “fair deal” from the BJP. Especially, Kumar is said to be more annoyed with the BJP after none of his demands were considered by the Narendra Modi government.

The JD-U had demanded for a berth in the Modi government, grant of special category status to Bihar and flood relief package while the chief minister himself had sought for granting central university status to Patna University.

Kumar is also miffed with his alliance partner over the communal violence which gripped about a dozen districts during Ramanavami this year even as the opposition charged the saffron camp with stoking tension, reports said.

The flash point in their relations came in the weekend when a delegation of the BJP met the DGP and handed over a memorandum, accusing the government of acting with bias. The memorandum alleged that the police cracked down on majority Hindus while going soft towards the Muslims.

Paswan, on the other hand, too has expressed similar sentiments in public and advised the BJP to change its “anti-Muslim image”. The Bihar chief minister not only supported Paswan’s stand but went on to add that his government couldn’t tolerate communalism at any cost.

The problem with Kumar is that he has returned to the NDA only eight months back and if he walks out of it again, this will convey a very wrong message among the voters, further bulldozing his image and credibility. So, he is said be working on a plan to create his own block within the NDA.

Reports added the chief minister is also in touch with the Rashtriya Lok Samata Party (RLSP) chief and union minister Upendra Kushwaha and expelled RJD MP Pappu Yadav. Both these leaders too have met Kumar in recent days, fuelling speculations.