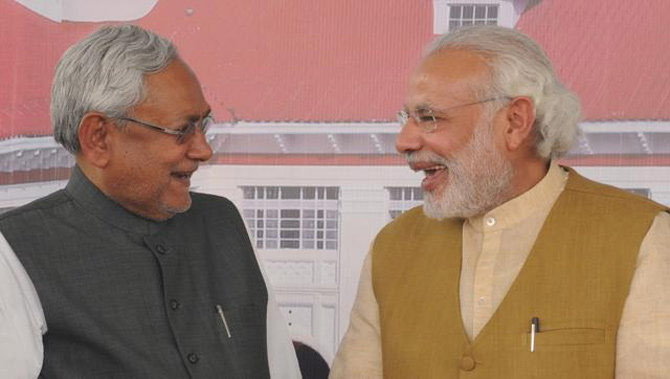 PATNA: Barely few months ago, on the eve of Bihar assembly polls, the firebrand BJP minister Giriraj Singh would tell the masses how chief minister Nitish Kumar was doing the “Maike” (home of a bride’s parents) politics to make RJD chief Lalu Prasad fall in line. Whenever Nitish felt cornered within the Grand Alliance, explained Singh, he used a brilliant trick of going in the company of Prime Minister Narendra Modi, his arch-rival, or other senior BJP leaders in a bid to build pressures on Lalu Prasad.

“Whenever he found himself cornered, Nitish Kumar used pressure tactics to force Lalu Prasad agree to his demands in a typical Bollywood number ‘Main maike chali jaungi tum dekhte rahiyo (concede my demands or I will go in the company of my old friends)”, was how commented Singh.

Well, the idea always worked as it forced Lalu and his company to concede Nitish’s every demand—whether it was for the formation of a new entity under Mulayam Singh Yadav (which though ultimately didn’t work) or for accepting Nitish as the chief ministerial candidate of the Grand Alliance.

Was Nitish doing the same when he shared dais and chopper with his arch-rival, cracked jokes with him and also heaped praises on Modi for his development initiates towards Bihar while tactfully choosing not to remind the latter about his two big promises made for Bihar, such as grant of special category status to Bihar and Rs 1.25 lakh crore Special package for the state?

The idea seems to be working now as the RJD, reports suggested, has almost agreed to fight the upcoming UP elections under the leadership of Nitish. Earlier, the RJD did not look quite eager to be a part of Nitish-led Grand Alliance which will be joining the UP polls. The result was that Nitish had only “insignificant” parties, such as Rashtriya Lok Dal and Peace Party willing to join his Grand Alliance.

Similar tactics were earlier applied by Nitish to make Lalu fall in line when the latter refused to declare him as Grand Alliance’s CM candidate. Subsequently, Nitish reached out to the Congress and got his name endorsed for the CM post following his frequent hobnobbing with the Congress’ top leadership—Vice-President Rahul Gandhi and Ahmad Patel, political secretary of party chief Sonia Gandhi included. This forced Lalu to accept his leadership eventually.

Likewise Nitish joined the company of PM Modi and Union Finance Minister Arun Jaitely on the eve of the merger process looking virtually stuck up. It was this pressure tactics that apparently led to formal merger announcement and election of SP Chief Mr Yadav as the President of the new entity on April 15.

Here in this case too, Lalu was learnt to be refusing to be a part of the Nitish-led Grand Alliance in UP citing his family relations with Mulayam Singh Yadav whose party rules India’s most populous state. So finally, Nitish reached out to Modi, praised his initiatives in public and also declared to work in coordination with the Centre which the experts said was nothing more than pressure politics.

Prior to this, he had already met the Governor and senior BJP leaders apparently to convey the message to the RJD camp that he was sailing on two boats. He rushed to the Raj Bhawan on March 9 to have tea with Governor Ram Nath Kovind and other senior BJP leaders who included Sushil Kumar Modi, former deputy chief minister, Prem Kumar, Leader of Opposition in the Bihar assembly and Awadhesh Narayan Singh, Council chairman. The Bihar assembly Speaker Vijay Kumar Chaudhary (JD-U) also joined the occasion.

Although it was described by the Raj Bhawan as a courtesy meeting to seek feedback over development works and law and order situation in the state, experts say there is no such precedent of the Governor holding such a meeting. Earlier in January too, the chief minister had rushed to the Raj Bhawan twice and had even lunch with the Governor, fuelling speculations.

Though not much is known about the CM’s “dramatic moves”, insiders said he is feeling “uncomfortable” in the company of the RJD especially after the way the shooting crime graph remains a matter of serious concern, the lawmakers from coalition partners have got indulged in unseemly controversies and also due to the alleged growing interference of the RJD chief in the government. In public, though Nitish had defended Lalu.

Informed sources say from the beginning itself, Nitish has taken extra not to give any credit of his government’s development programme to its partners, and hence has given a rather personal name to his key development idea to be precise “Nitish Nishchaya” (Nitish’s resolves), rather than naming it as “resolves of the Grand Alliance government”.

“The nomenclature itself explains how he does not want to give any credit of success to his alliance partners,” explained a political expert.

Day after ‘pulls and pressures’, RJD hints about fighting UP polls under Nitish’s leadership