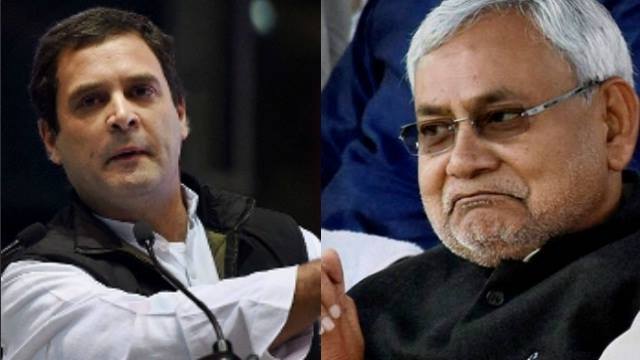 During the meeting, Kumar is believed to have told Gandhi not to defend the “tainted” RJD president Lalu Prasad and also reminded him about how he had torn apart the ordinance which was said to have been brought by the previous UPA government to save the convicted leader, media reports said today.

However, there is no official confirmation about it as both the Congress and the JD-U termed it as a “courtesy meeting”.

The meeting took place amid the ongoing turmoil in the Bihar grand alliance involving the JD(U) and RJD.

The Central Bureau of Investigation (CBI) has filed corruption cases against Lalu Prasad and her son Tejashwi after a series of raids at the RJD chief’s home and other properties.

Since then, a cold war between the two major alliance partners continued to brew as the Opposition BJP in the state questioned Nitish’s stay in power keeping Tejashwi in his cabinet.

According to reports, the RJD, at its legislature party meeting, made it clear that there was no question of Tejaswi Yadav to resign from the post of State’s Deputy Chief Minister.

Nitish Kumar has maintained a silence since the CBI raids and has not made any comment either in favour or against Lalu Prasad and his son.

In 2015, the grand alliance, formed by the JD(U), RJD along with Congress, was voted to power over the Bharatiya Janata Party in the Assembly election.