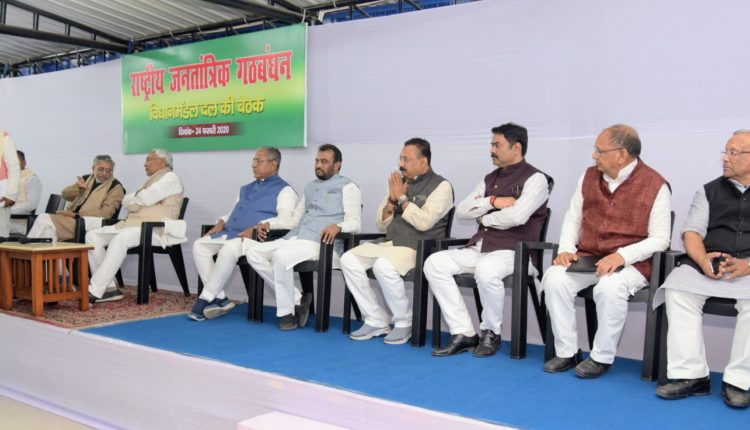 PATNA—The ruling National Democratic Alliance comprising the BJP, JD-U and the Lok Janshakti Party (LJP) has become a “divided house” ahead of the coming assembly elections in Bihar due later this year.

What has caused trouble in the ruling alliance is that each party is working with its own agenda which is totally at variance with each other’s stand.

It all started with the LJP which supported the demand of the four lakh contractual teachers who have been on indefinite strike seeking equal pay for equal work, old pension scheme and service condition.

The striking teachers also boycotted invigilation duty during the just-held matriculation examinations despite warning for severe punitive action by the state government.

The repeated strike by these teachers has robbed off peace of the Nitish Kumar government and hugely annoyed them but the LJP in a curious move has announced to include teachers’ demand in its party manifesto.

Similarly, the BJP which passed the citizenship amendment act (CAA) has announced not to drag its feet on this act despite nation-wide unrest and has kept on strongly supporting the NPR and the NRC but chief minister Nitish Kumar in an interesting move got a resolution against the NRC and the NPR in current form passed from the Bihar assembly.

The BJP is now shocked at the way the JD-U headed by the chief minister Nitish Kumar passed this resolution from the Assembly.

“The resolution against the NRC as passed by the Bihar assembly has shocked the BJP,” said BJP legislator Sachhidanand Rai.

Another senior BJP leader and minister Vinod Singh said the resolution was passed in haste. Many BJP leaders say they were not taken into confidence before passing the resolution.