Is Nitish Kumar feeling ‘insecure’ in the company of BJP? 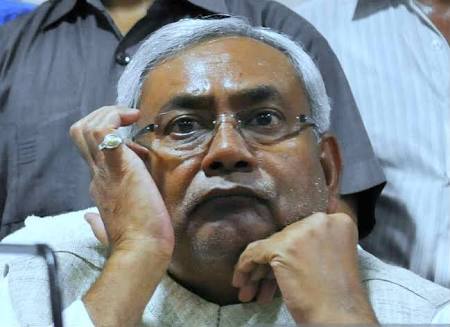 PATNA: On Tuesday when Bihar JD-U president Vashishtha Narayan Singh said his party was “in favour of simultaneous elections to Lok Sabha and Bihar assembly” in response to suggestion from a BJP minister, soon came an interesting reaction from the Congress.

State Congress president Ashok Chaudhary was quick to tell a Hindi TV news channel that he too favours this concept.

Prior to that, a section of Congressmen looked hell-bent on breaking alliance with the RJD very much against the decision of the central leadership and appeared headed for the JD-U. The ‘trouble’ still persists even after one-to-one meeting with Congress vice-president Rahul Gandhi.

Congress chief Sonia Gandhi and senior party leader Jyotiraditya Scindia too tried hard to calm down the party lawmakers and prevent split in the party but the problem is yet to be over. The Congress leadership is now accusing JD-U leader Nitish Kumar of trying to cause split in the party.

The JD-U has only “corroborated” the Congress’ charge by stating that the Congress MLAs don’t want to stay with the “corrupt” Lalu Prasad.

The million-dollar question now being hotly debated in state’s political circles is that why the JD-U wants a split in the Congress? Is it feeling insecure in the company of the BJP?

The development indeed looks strange given the fact that the Nitish Kumar has already proved his majority on the floor of the House on July 28 with 131 votes in his favour.

Experts say a series of recent developments has dropped ample hints that the JD-U is not at all happy in the company of its new friend and the split could be the part of the JD-U’ move to strengthens its position in the NDA.

Although achieving majority on its own appears a distant dream for the JD-U but the desperation is all too visible in the Nitish Kumar camp.

This came first to light when the Prime Minister Narendra Modi announced a little flood relief package of Rs 500 crore for Bihar and then kept its new ally out of his cabinet during its recent reshuffle.

What was further strange, the Nitish Kumar government has sought a central financial assistance of only Rs 7,636 crore while its initial estimate of flood damage was even Rs 10,787 crore!

What the chief minister offered logic for that was even more interesting: “We have adopted a practical approach in seeking assistance. Nuksan to isase kahin adhik hua hai (the total damage has been much more than what has been sought).”

Similarly, the JD-U was very quick to put seal of its affirmation on centre’s suggestion for holding elections to Lok Sabha and state assemblies simultaneously.

The move, indeed, looks absurd if contrasted with the previous stands of the JD-U. It was the same JD-U which taking an entirely different stand had earlier supported Congress’ presidential candidate Pranab Mukherjee against NDA’s PA Sangma.

Also, Nitish Kumar was once seen rushing to the Sadaquat Asharam, the Congress’ headquarters in Patna, to drop then union finance minister P Chidambram in May 2013 despite being in the company of the NDA.

“For me dropping him to Congress office was just a matter of courtesy…I do not mix courtesy with politics,” was how Kumar had told the media then.

These developments were enough to explain how the chief minister enjoyed full freedom then and took independent decisions without caring for its ally.

After forcing Lalu to join his company, Nitish raising the issue of corruption: Sharad Yadav