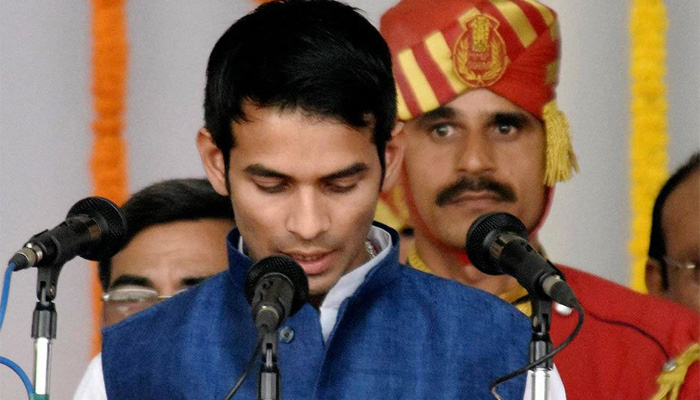 PATNA: Former health minister Tej Pratap Yadav has launched a frontal attack on chief minister Nitish Kumar a day after he proved his confidence vote in Bihar assembly with the help of the BJP.

Nitish Kumar has joined hands with the BJP, the party which he spurned in 2013, charging it with trying to implement the “communal agenda”.

On Wednesday, though, he walked into the company of the same BJP to form government in Bihar minutes after pulling out of the Grand Alliance. This has drawn bitter criticisms from the RJD.

In fact, PM Narendra Modi at an election rally in Muzaffarpur in Bihar on July 25, 2015 had publicly questioned Kumar’s DNA over a series of his political moves.

In retaliation, Kumar linked his DNA with the people of Bihar and later despatched envelopes containing nails and hairs to the PMO to test them.

Nitish Kumar also sent an open letter to the PM to register his protest over latter DNA remark.

Given below is the full content of the letter sent to PM Modi: 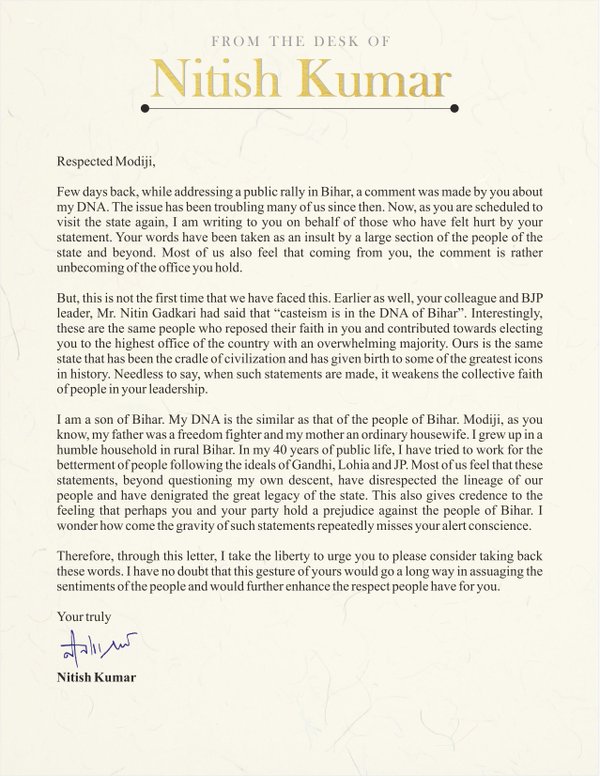 Few days back, while addressing a public rally in Bihar, a comment was made by you about my DNA. The issue has been troubling many of us since then. Now, as you are scheduled to visit the state again, I am writing to you on behalf of those who have felt hurt by your statement. Your words have been taken as an insult by a large section of the people of the state and beyond. Most of us also feel that coming from you, the comment is rather unbecoming of the office you hold.

But, this is not the first time that we have faced this. Earlier as well, your colleague and BJP leader, Mr. Nitin Gadkarihad said that “casteism is in the DNA of Bihar”. Interestingly, these are the same people who reposed their faith in you and contributed towards electing you to the highest office of the country with an overwhelming majority. Ours is the same state that has been the cradle of civilization and has given birth to some of the greatest icons in history. Needless to say, when such statements are made, it weakens the collective faith of people in your leadership.

I am a son of Bihar. My DNA is the similar as that of the people of Bihar. Modiji, as you know, my father was a freedom fighter and my mother an ordinary housewife. I grew up in a humble household in rural Bihar. In my 40 years of public life, I have tried to work for the betterment of people following the ideals of Gandhi, Lohia and JP. Most of us feel that these statements, beyond questioning my own descent, have disrespected the lineage of our people and have denigrated the great legacy of the state. This also gives credence to the feeling that perhaps you and your party hold a prejudice against the people of Bihar. I wonder how come the gravity of such statements repeatedly misses your alert conscience.

Therefore, through this letter, I take the liberty to urge you to please consider taking back these words. I have no doubt that this gesture of yours would go a long way in assuaging the sentiments of the people and would further enhance the respect people have for you.”