Nitish hits out at Giriraj, says those who can’t respect other religions have no religion 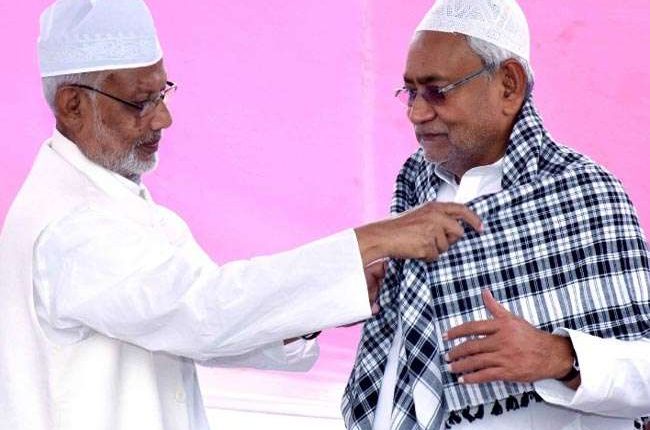 PATNA: Bihar chief minister Nitish Kumar on Wednesday slammed BJP leader Giriraj Singh for his unwarranted comments over Iftar party and said those couldn’t respect other regions have “no religion”.

“No matter what religion you follow but every religion preaches respect and love for each other. Those who do the opposite have no religion and want to defame it,” the chief minister Nitish Kumar told the media after joining Muslims in offering prayers on Eid.

He said our country is a brilliant example of communal harmony, where followers of multiple religions live with peace “This is the strength of the country,” he observed.

He said he couldn’t comment on a particular person but some people have indeed developed a habit to be in the news by making irresponsible statements.

“How this would have been better when similar functions were organized for Navatra festivals? We lag behind in matter of our own faith but ‘dikhawa mein aage rahate hain”, tweeted Giriraj Singh who was inducted as Union Minister of Animal Husbandry, Dairying and Fisheries.

The tweet subtly attacking the chief minister after he was caught in the company of various ruling and opposition party leaders during the Iftar parties amply indicates all is certainly well in the NDA and that the rift between the JD-U and BJP has widened beyond repair.

The JD-U reacted strongly to such comments coming from a senior leader like Giriraj Singh for whom the chief minister has intensely campaigned in the elections in Begusarai.

Rift between the two NDA partners has deepened after JD-U was not given ‘respectable’ treatment by the BJP during Narendra Modi cabinet formation last week and was offered only berth in the Modi cabinet which the JD-U rejected.