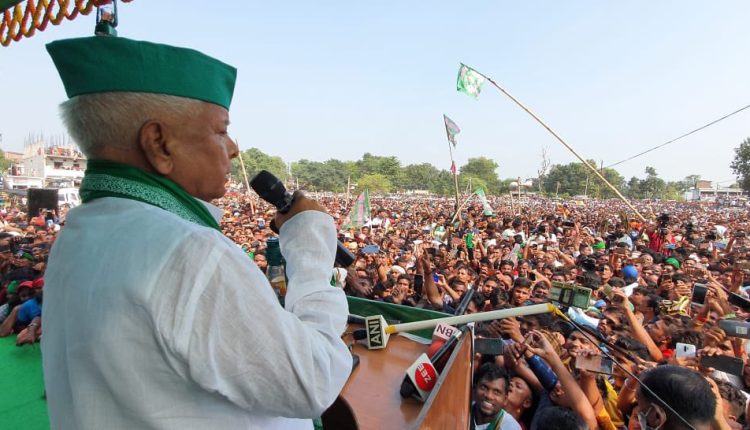 PATNA—Rashtriya Janata Dal (RJD) president Lalu Prasad hit the campaign trail after a gap of six years on Wednesday, setting aside his health conditions. Although he looked frail owing to his health issues, Prasad appeared in his element attacking his bête noire chief minister Nitish Kumar whom he accused of forming government by deceit in his absence. He has come out of jail on bail only recently.

Addressing the election rallies in Kusheshwar Sthan and Tarapur where by-elections are being held due to death of the sitting legislators, the RJD chief mounted heavy attacks on the chief minister for what he described as “MLA scam” during the counting of votes. He said the people of Bihar had given mandate to Tejashwi Yadav in the 2020 assembly polls.

“But Nitish got his winning candidates defeated and formed his government by deceit. I will avenge for this,” Prasad declared, addressing election rallies in today.

According to him, at least 15 of his party candidates lost elections by thin margins of just 10 (ten) votes. He said Nitish wouldn’t have done that had he been out of the jail. What was satisfying for Prasad was that impressive crowds welcomed him and cheered wherever he went.

Prasad also mocked Nitish’s rhetoric of not joining hands with the BJP.  “Earlier, he used to say ‘mitti mein mil jayenge, lekin BJP ke saath nahi jayenge (I will prefer to die but not to go with the BJP) but see what happened,” remarked Prasad, triggering loud applause from the crowd.

He also slammed Nitish for twisting his ‘Visarjan’ remark. “Commenting on my remark, he (Nitish) said that I will get him killed. Is this the job Lalu Yadav left with? I am not going to kill you, you will die yourself,” Prasad added. Prasad had earlier said he had come to Bihar to ensure Nitish’s and NDA’s ‘visarjan” (immersion) in the by-polls.

The RJD president alleged more than one lakh people died of Covid-19 in Bihar in the past one year and lauded the role of quacks for saving the lives of people in crisis. He also slammed the NDA government for shooting inflation and the way the prices of petroleum products were increasing fast. Unemployment, corruption and Rs15 lakh promise to every citizen were the other issues which the RJD chief raised.

Voting for by-polls in Tarapur and Kusheshwar Sthan is scheduled for 30 October and the results will be announced on 2 November. What is interesting, both the RJD and the Congress are fighting against each other in the by-polls although they are part of the Mahagathbandhan (Grand Alliance). Top Congress leaders are repeatedly saying that the grand old party has walked out of the Grand Alliance and will chart out its own course of action in coming LS polls.