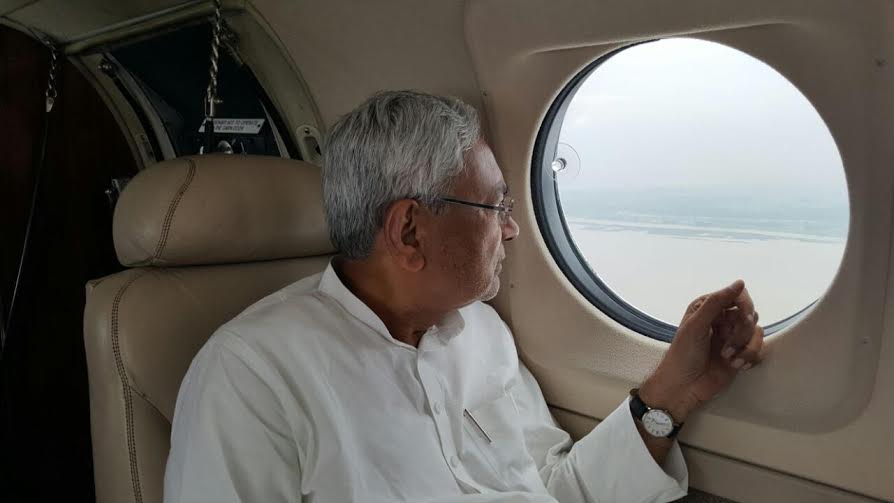 Soon after conducting the aerial survey, the chief minister held a meeting with the officials at Purnia airport and reviewed the flood situation.

At the meeting, he directed the officials to launch massive relief and rescue operation.

“The flood victims should be immediately served cooked food by starting community kitchens. If not possible, they should be provided with dry ration,” the chief minister told the officials.

He also ordered the officials to conduct a survey of the population affected by floods and provide immediate relief to the affected families.

As per an officials report, 1.78 million population settled in 1,630 villages across 10 districts of Bihar are currently affected by floods which have also claimed a total of 22 live so far.

Floods have also damaged homes and standing crops planted in around 5 million hectares.

Reports further said more than 350,000 people have been evacuated so far and lodged in 357 relief camps set up by the state government.

Right now, all the major rivers, such as Kosi, Gandak, Mahananda, Kankai, Kamala Balan and Bagmati, have been flowing above danger marks.

The situation has turned grave owing to heavy rains in the catchment areas of Nepal, resulting in heavy discharge of waters in all the rivers.

Keeping in view the gravity of the situation, the state government has intensified patrolling along the Kosi embankment, cancelled leaves of engineers and ordered the officials to camp in their respective districts.