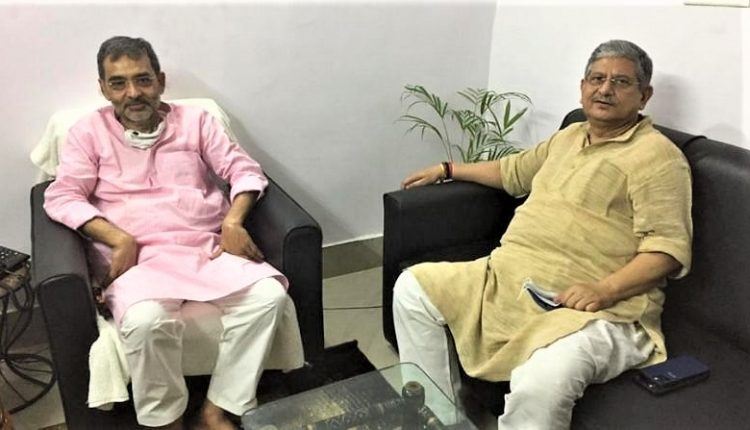 PATNA—Bihar chief minister Nitish Kumar is said to be caught in a peculiar situation with many leaders staking claims for the post of Janata Dal United (JD-U) president in the aftermath of the continuing chief RCP Singh getting inducted into the Narendra Modi cabinet.

Curiously, RCP Singh is in no mood to relinquish the post even after becoming a minister, media reports have said. Currently, two leaders are in the mad race for the post of JD-U chief. Although none has said anything openly over the issue but all is not going well in the ruling JD-U.

According to reports, party MP Lalan Singh who narrowly missed the chances to become a minister at the Centre, does not seem to be in compromising mood while Upendra Kushwaha who joined JD-U barely few weeks ago is also in the race.

The development comes just ahead of the National Executive meeting of JD-U is to be held in Delhi on July 31. It is being speculated that Nitish Kumar will try to put an end to this crisis by announcing the name of the new national president of the party in the meeting.

Media reports said after his induction into the Modi cabinet on July 7, RCP Singh is under pressure to step down as the national president under the party’s principle of ‘one man one post’. However, he is not ready to leave this post for the time being, reports said.

Lalan Singh camp, however, is said to be putting pressures on him to leave the post of national president under the principle of ‘one man one post’.

It will be interesting to see who gets the command of JD-U, which has become the number three party in Bihar. The million dollar question being debated now is whether the chief minister will reply on Upendra Kushwaha to expand his party base among the ‘Love-Kush community or expresses his faith in Lalan Singh to win support of the upper caste Bhumihar community members.

But, how Kushwaha fits in Nitish’s scheme of things is underlined from the fact that soon after joining the JD-U, he was first nominated to the Bihar Legislative Council and then appointed the chairman of the JD-U Parliamentary Board.

Prior of Kushwaha, RCP Singh was holding this post. According to the JD-U constitution, the national president of the party also happens to be the chairman of the party’s national Parliamentary Board. That was the reason RCP Singh held this post before Kushwaha joined the JD-U.

Kushwaha also has a long experience in running the organization. But, it cannot be denied that the giving key responsibility to new entrant to the party will leave old and loyal party leaders angry.