MANY LOCALITIES OF PATNA ARE CURRENTLY REELING UNDER FLOOD-LIKE SITUATION 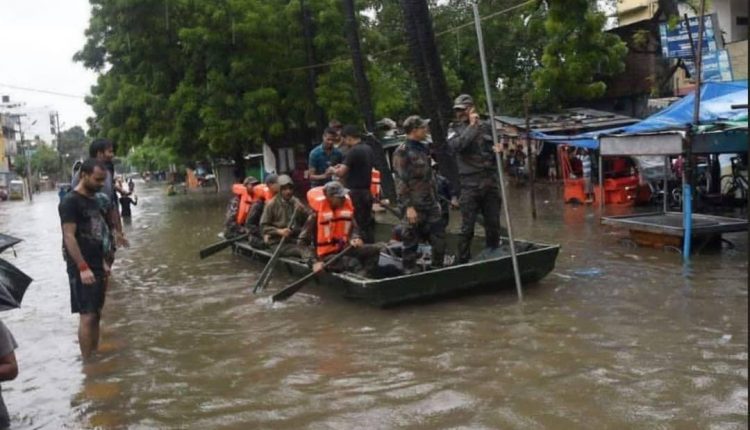 Authorities launched rescue operations and relief operations in Patna as the overall flood situation caused by incessant rains for the past two days turned critical in the state capital on Sunday.

Quite many localities of the state capital are reeling under waist to neck-deep waters, prompting the disaster management authorities to deploy teams of NDRF and SDRF to rush reliefs to the people trapped in waterlogged areas.

Disaster management department officials said the rescue teams have rescued hundreds of students trapped in the flooded Rajendra Nagar locality of Patna. All these students had been living in rented accommodations and private hostels for study.

“People living in the ground floors are being rushed to the safer places,” Bihar disaster management department secretary Pratray Amrit told the media on Sunday.

He added Sudha milk outlets are being opened at six places in the flooded localities to meet the daily milk requirements of the people.

As the overall situation turns from bad to worse, Bihar chief minister Nitish Kumar held an emergency meeting with the disaster management officials today and reviewed the continuing rainfalls situation in the state.

The chief minister blamed the “climate changes” for the prevailing situation in the state.

“We can’t say anything about the prevailing rains in the state. Even the meteorological officials are not giving concrete information to us about when the rains will last,” the chief minister said.

“According to my opinion, rains will continue in the next three days,” said the chief minister.

The chief minister further expressed apprehension about rain waters flooding all localities of Patna in the coming days if the water level of Punpun river also rose.

Nitish Kumar added that the government was alert and initiating every measures to help the people in  distress.

The chief minister also visited the flooded areas of Patna and issued necessary instructions to the officials concerned.

Horrifying scenes on Patna streets after rains, Nitish blames it on climate change