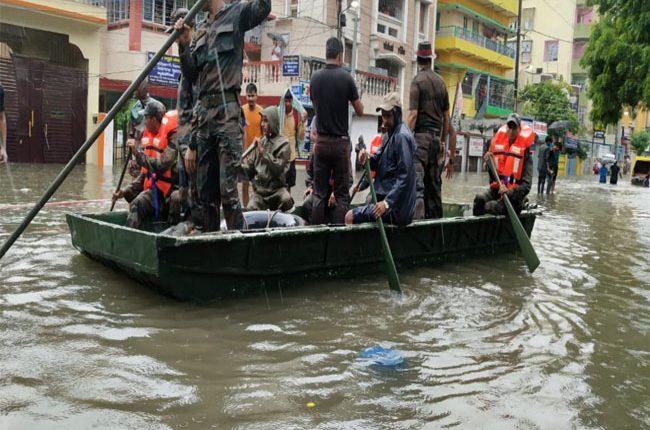 Torrential rains continuing for the past 72 hours have thrown normal life out of gear and brought floods of miseries for the residents across the Bihar state, virtually forcing them to stay inside.

The Indian Meteorological Department has predicted more rains in the next three-four days saying the situation would get normal by after October 3.

The situation is such that the Disaster management authorities have deployed NDRF teams to shift marooned people to safer places.

In several localities of Patna, such as Rajendra Nagar, Kankabagh, Kankarbagh and Patliputra, the situation is more critical with waters entering many home and residents forced to move out under waist to neck-deep water.

What is worse for the residents is that power, phone and internet connections are not working, leaving the masses totally idle.

Authorities have issued red alert for heavy rains for 15 districts.

Many residents say the situation in Patna is appears to be going like 1975 when the state capital had been devastated by floods.

The overall situation is likely to deteriorate further since Indrapuri Barrage has released some two lakh cusecs of water even as the continuing rains have already resulted in many rivers flowing over danger marks.

“Even during 1975 floods, this was not the scene in Kankarbagh but this time, our locality is entirely flooded. We are confined in our homes,” said a senior journalist Abhay Kumar.

Keeping in view the seriousness of the situation, Bihar chief minister Nitish Kumar held emergency meeting with the disaster management department officials in Patna on 28september/2019 and got details about the rainfalls and water level of rivers from the district magistrate through video conferencing.

Indian meteorological department officials said the state received 52 ml of rains in the past 24 hours. Jandaha in Vaishali district and Rajauli in Nawada district received more than 200 ml of rains.

Most parts of the state are currently reeling under rainwater with Patna virtually turning into a floating city.

Also Read: How a small mistake turned Bihar media baron into a pauper

In many localities of the state, rains waters have entered homes and even disrupted rail and health services.

Quite many localities of Patna witnessed boats plying on the main streets as these localities are flooded in knee-to-waist-deep waters.

From tiger’s urine to solar light: How Jharkhand battles to keep elephants away