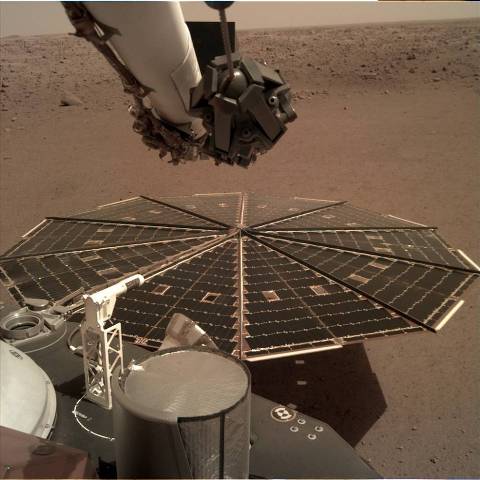 NASA’s Interior Exploration using Seismic Investigations, Geodesy and Heat Transport (InSight) lander, which touched down on Mars just 10 days ago, has provided the first ever “sounds” of Martian winds on the Red Planet.

InSight sensors captured a haunting low rumble caused by vibrations from the wind, estimated to be blowing between 10 to 15 mph (5 to 7 meters a second) on December 1, from northwest to southeast.

The winds were consistent with the direction of dust devil streaks in the landing area, which were observed from orbit, read the NASA website.

“But one of the things our mission is dedicated to is measuring motion on Mars, and naturally that includes motion caused by sound waves.”

Two very sensitive sensors on the spacecraft detected these wind vibrations: an air pressure sensor inside the lander and a seismometer sitting on the lander’s deck, awaiting deployment by InSight’s robotic arm.

The seismometer recorded lander vibrations caused by the wind moving over the spacecraft’s solar panels, which are each 7 feet (2.2 meters) in diameter and stick out from the sides of the lander like a giant pair of ears.

Another RLSP leader killed in Bihar- sixth in eight months

India first country to grant approval for emergency use of 2 COVID-19 vaccines, PM…