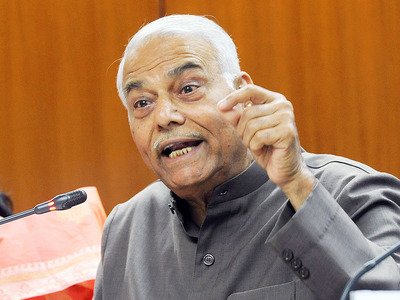 In an interview to the Gulf News, rebel BJP leader Sinha said the situation this time is entirely different from 2014 as common masses are disappointed, frustrated and angry.

“2014 will not be repeated, the atmosphere today is very different than it was in 2014, people are disappointed… frustrated and angry. They (BJP-led NDA) will get far less number and won’t be able to form the government,” Sinha told the GN.

According to Sinha, at presently RSS has come in a total control of Prime Minister Modi. “The RSS will do so as told by him (PM Modi),” Sinha was quoted as telling the paper.

Talking about Modi’s relative with the media, Sinha said since coming to power in 2014, the PM has not addressed a single Press conference and very strangely the Press never complained about it.

He also looks disappointed at the way senior leaders in the BJP including LK Advani has been silent all these years.

“They should have spoken up, I am very surprised and shocked… that is a disappointment. I must confess to my disappointment because he [Advani] was a strong voice against Indira Gandhi’s emergency and everybody else who is part of the government has not spoken up,” he added.

RJD in favour of Ram temple but it should be built with consensus, says Rabri Devi