My name is not Khan: Why this Bihar’s popular Online teacher wants to quit YouTube 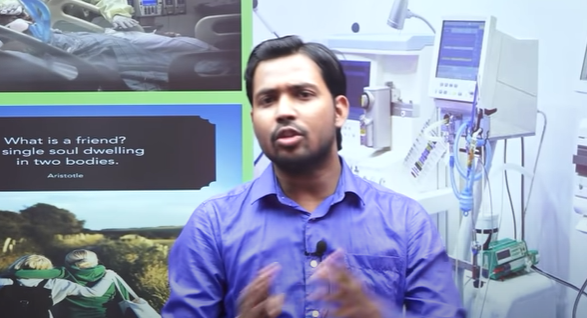 PATNA—What’s in a Name’? The quote by famous author William Shakespeare from the book Romeo and Juliet seems to be failing in India as people are much concerned about a person’s name right now to understand a controversy.

A teacher from Bihar who is very popular among his students for explaining crucial topics of General Science in unique ways on his YouTube channel named ‘Khan GS Research Center’ is currently the talk of the town.

Famous by the name ‘Khan Sir’, the teacher is known for his unique teaching style, which is peppered with east Indian elements and colloquialism making him a huge hit among fans and followers.

Khan Sir’s unique style of teaching added with the rustic charm of the Bhojpuri-Maithili dialect is enough to tickle the funny bones as well as impart knowledge on serious topics with utmost ease to the students.

Why is ‘Khan Sir’ trending?

On April 24, ‘Khan Sir’ had shared a video on France-Pakistan relations, where he mentioned at the mass protests that took place in Pakistan between April 11-20 were for the expulsion of the French ambassador and to boycott the use of French Gods. The video went viral and irked the Netizens and the debate eventually got divided into 2 groups.

Many Twitter users criticised the video heavily and said called ‘Khan Sir Islamophobic’ and some claimed that he is not a Muslim but a Hindu whose real name is ‘Amit Singh’.

As soon as the video went viral with #ReportKhanSir on Twitter people started digging out more information about the online teacher and found pictures of him during Rakhsha Bandhan, a festival mainly celebrated by Hindus. While some claimed that his real name is Amit Singh, ‘Khan Sir’ himself has issued a clarification on Youtube.

What is the reality of ‘Khan Sir’?

If you listen to the first part of the video. ‘Khan Sir’ is talking about the controversy and fake news reported by various channels about his name and identity and even explains that nothing is in a name.

Khan Sir says in his video that he was taking a class and some students insisted on knowing his real name as everybody knows him by the name ‘Khan Sir’ so he jokingly said that some people call me ‘Amit Singh’.

“Even when I go to banks, people call me Amit Singh but I never said that it is my real name. It was just to have fun with the students,” Khan Sir said in the video.

He further says that Khan cannot be my name as it his Surname. He says in the video, ‘Khan mera naam nahi hai, title hai”.  He further explained that he has even published more than 26 books in Kiran publication under the name ‘Khan Sir’. He says, “Why would I publish my books under the name Khan Sir if my surname wouldn’t have been Khan?”

He says that there are many famous authors whose first names are not known but they are recognized by their surnames, So am I. He says even my PAN card and Aadhar card have the surname Khan and I got my books registered under the same name.

He says that he has written books in Urdu as well so students from the Muslim community could get a good education and succeed.

However, he further says in the video that since his name has raised such a huge controversy so it has become a million-dollar question and he will reveal his complete real name someday when the controversy will be over.