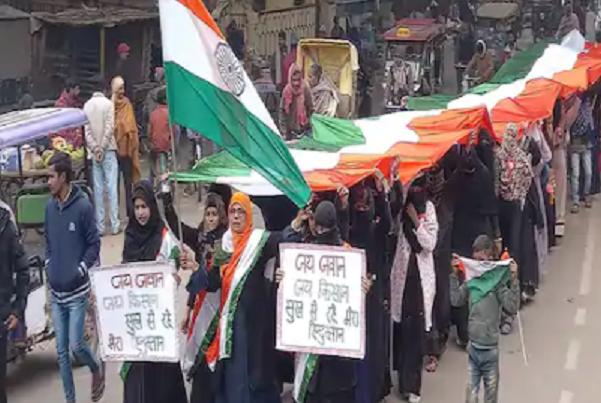 PATNA—Muslim women took out a Tiranga Yatra in Bihar in support of the agitating farmers who have been protesting against the controversial farm laws for the past about two months.

Hundreds of Muslim women draped in burqas joined the 100-metere-long Tiranga yatra which was taken out in Munger district on the Republic Day.

During the rally which passed through various thoroughfares of the Munger town, the women kept on shouting slogans like “Jai Jawan Jai Kisan, Khush Rahe Mera Hindustan”.

“When the daughters are lending full support to the thousands of farmers protesting on Delhi border in the chilling cold, why can’t we support them?” asked Ishrat Jahan leading the yatra.

The Communist Party of India (Marxist-Leninist) and Akhil Bhartiya Kisan Mahasabha took out tractor rallies across the state on Tuesday in support of the protesting farmers.

They were demanding cancellation of the controversial farm laws and giving legal status to the Minimum Support Price (MSP).

Dozens of tractors fitted with national and red flags passed through various routes of the state capital today as rallyists shouted slogans against the Prime Minister.

“The farmers’ protests have created a sort of environment which was witnessed during the freedom movement. Now, the entire country is uniting against the present government,” said Dhirendra Jha, national president of Akhil Bhartiya Khet Aur Gramin Mazdoor Sabha.

He said they would not allow another “company rule” in the country.