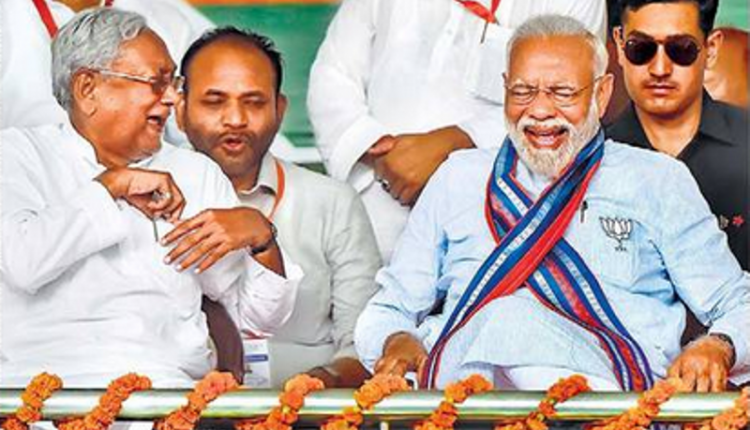 Why are they laughhing? Prime Minister Narendra Modi and Nitish Kumar at an election rally in Bihar on April 4
801
Share

Prime Minister Narendra Modi and Bihar chief minister Nitish Kumar have never showed bon homie in the past. They clasped hands together, flashed smiles and posed for photographs only during the media events. Bitterness was all that prevailed between them.

It’s only now that both the leaders have begun showing up together, thanks to the ongoing Lok Sabha polls where they face the pressures to perform. As such, this is for the first time that their friendship also remains on test at this election since never in the past they came so close even while Kumar remained in the NDA earlier.

The present situation is such that Kumar has not missed even a single election rally that Prime Minister Narendar Moddi has addressed in Bihar. As such, Nitish Kumar’s presence at Modi rally has now become a hot topic of debate among the masses and the media.

Challenge for both Modi and Nitish

So what are the compulsions before the two leaders? Observers say Modi faces the challenge to retain majority of Lok Sabha seats to continue as the PM for the second term, the challenge before Nitish Kumar is to win as many seats from his share to prove his charisma still continues among the voters. In a way, both are dependent on each other for political survival and thus their political friendship is very much on test here.

Until recently, the Prime Minister had not taken Nitish Kumar very seriously when he ignored the latter demand for granting special category status to Bihar, granting central university status to Patna University and then releasing enough funds for the Bihar floods victims. Then Kumar’s hard bargaining for respectable number of seats and his demand for contesting LS elections on equal number of seats too annoyed the BJP to a certain extent yet the latter remained silent out of political compulsions.

But suddenly, presence of Nitish Kumar at Modi rallies has become very common sight in Bihar. While Nitish heaps praises on PM for his air strike on terror camps, PM praises Nitish for making Bihar free from “lantern”. So, everyone is now eager to know how much their political friendship works in Bihar where castes have dominated every elections.

Last time while Nitish Kumar was still a part of the NDA, he had cancelled the dinner arranged in honour of the visiting BJP leaders who had gathered in Patna to attend party’s executive committee meeting in May 2010. The reason why the chief minister had got angry was the move by the BJP to give advertisements in local newspapers which showed Nitish Kumar shaking hands with Narendra Modi, then chief minister of Gujarat. As such, Nitish Kumar never liked to be in the company of a “hardline Hindutva” leader like Modi.

Angry Nitish Kumar even returned the Rs5 crore cheque donated to the Kosi flood victims by the Gujarat government. At one point it appeared the Nitish Kumar will quit the NDA and contest the assembly elections alone such was the level of bitterness between them but somehow NDA survived in Bihar.

Then Nitish Kumar opposed the candidature of Narendra Modi as NDA’s PM face and finally walked out of the NDA in 2013 after Modi was projected as PM candidate. The same Nitish Kumar is now heaping praises on Modi and seeking votes from the masses to make him the PM.

The question being debated in the political circles of Bihar now is if this is the real friendship between Modi and Nitish Kumar or it is born out of political compulsions?