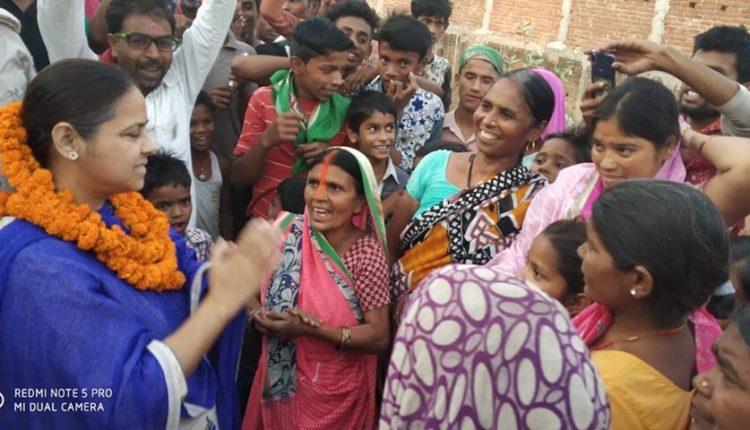 PATNA: “Chahe kar la tu halla bekar hoi, kuch na chalihen tohar Lalu sarkar hoi (How much you try to defeat Lalu Prasad in the elections, nothing will work),” a group of rural women goes on singing this song in chorus at a village in Danapur as RJD candidate Misa Bharti visits there to seek their support.

She gets overwhelmed when the poor women who eke out their living by working in others’ farmlands take turns to give her “khoinchha” (a kind of farewell gift given to daughters at the time of send-off from parents’ home) as she visits their homes for support.

The scene gets more emotional after her mother Rabri Devi, former chief minister and wife of jailed politician Lalu Prasad, joins Bharti on the mission to seek votes from the masses.

The fact that Prasad has been in jail for the past about 18 months and his bail requests were rejected first by both the Jharkhand High Court and then by Supreme Court has created a sort of sympathy wave for them.

The masses console her and tell not to lose heart saying what if her father is not around, they are with her.  And, the very factor seems upturning the poll calculations of the BJP this time. Ridding on sympathy wave, RJD nominee Bharti is indeed giving tough challenge to the BJP candidate and Union minister Ram Kripal Yadav in Patliputra which will goes to the poll in the last phase on 19 May.

In the last Lok Sabha polls, it was the BJP candidate Yadav who had got some benefit of sympathy after he was denied the ticket for this seat by the RJD.

Also, last time the BJP was seeking votes against the failures of the 10-year-old Congress government but this time it has gone in defensive mode and despite the Prime Minister Narendra Modi, BJP chief Amit Shah and a host Union ministers repeatedly promising moon, the masses don’t look amused anymore.

And, it’s the prevailing disillusionment among the voters which the RJD is trying to cash in on. So while the entire BJP and the PM rattle out its long list of “achievements”, particularly the air strike on the running terror camps in Pakistan, RJD candidate Bharti reminds the masses only the pre-poll commitments Modi had made to the voters last time.

“Did you get Rs15 lakh, did anyone get jobs and did black money come?” she just asks the masses once she knocks door of their homes.

The changed political situation also looks quite much favourable for the RJD now with a host of political parties such as the Congress, Rashtriya Lok Samata Party (RLSP), Hindustani Awam Morcha (HAM), Communist Party of India-Marxist-Leninist (CPI-ML) and the Vikashseek Insan Party (VIP) joining the Grand Alliance which the RJD leads.

The combined vote strength of the Grand Alliance, thus, looks more powerful than the NDA’s at this seat. So even if there is some split in the Yadav voters who are dominate this seat, the Muslims, Kushawaha, dalits and fishermen community are likely to bail the RJD candidate out. The Yadavs account for some 24.37 percent while Muslims population is around 8.22 percent at this seat . Both are considered the loyal support base of the RJD.

In the last LS polls, Bharti had lost the seat to the BJP with a little over 40,000 votes and the man who had player spoiler was the CPI-ML candidate Rameshwar Prasad. He had polled 51,623 votes, cutting into secular votes.

This time, however, the CPI-ML has not fielded its candidate from this seat following tacit understanding with the RJD which has supported the Left candidate on Ara seat. So this formula seems working this time. Apart from this, the general masses don’t look enthusiastic about voting for the BJP as was seem in the last LS polls.

Although the BJP banks on the support of the chief minister Nitish Kumar who returned to the NDA some two years back but his own charisma appears to be over now.

This can well be underlined from the fact that the chief minister himself is seeking votes for the JD-U candidates on the “popularity and achievements” of Modi, rather than highlighting his own government’s achievements in Bihar.  So, it will be a miracle if the BJP is able to retain this seat.