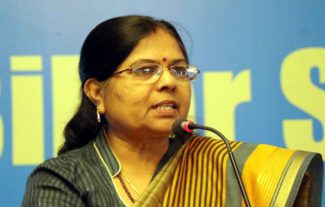 According to reports in local media, the minister was returning to Patna from Begusarai when she found the road blocked in Samastipur district. The road blockade was put by an angry mob of villagers protesting death of a man in the road accident.

“The mob went berserk and attacked her car with hard objects after her security personnel tried to forcibly clear the traffic,” according to a report in Dainik Bhaskar.

Later, she saved herself by hiding under the seat. Although she escaped unhurt, two of her security personnel got injured in the incident.

RJD chief Lalu Prasad used the incident to launch attack on the law and order situation in the Nitish Kumar government.

“Even a minister is not safe in the government. Imagine what will be the plight of the common women,” said Prasad.