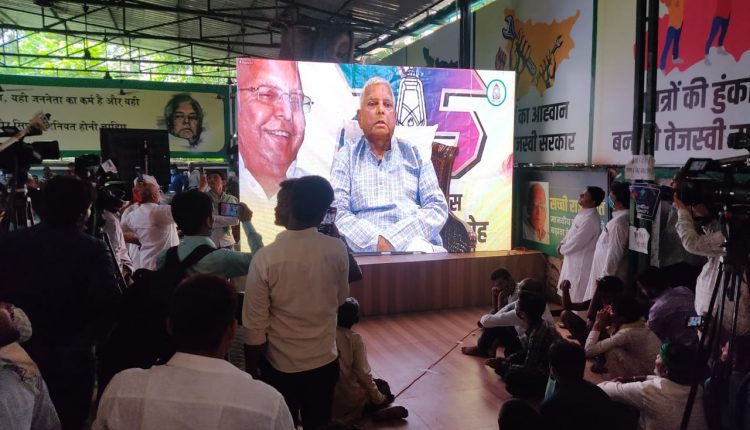 PATNA/NEW DELHI—Rashtriya Janata Dal (RJD) president Lalu Prasad made his first appearance on the national television on the silver jubilee of the party on Monday well after three years but he remained firm on his approach although looking frail and feeble.

Prasad has been suffering from more than a dozen health complications, including diabetes and kidney, and was granted bail by the court only recently. He is currently recuperating at the New Delhi residence of his daughter Misa Bharti, a Rajya Sabha Member.

“I assure you I won’t go back. Ham pichhe hatane-wale nahin hain. Mit jayenge lekin pichhe nahin hatenge (I am not going to back down. Will be finished but won’t turn back),” Prasad said, addressing the silver jubilee foundation day function.

He looked distressed at the prevailing situation in the country and said the secular and social fabrics of the country were in danger.

“GST, demonetisation and Covid infections have created an economic crisis before the country. Now, there is threat of destroying the social fabric. After Ayodhya, some people are talking about Mathura,” Prasad said.

He said the inflation had broken the backbone of the poor adding the rising petroleum prices had hit them hard.

He heaped praises on his younger son Tejashwi Yadav for properly leading the party and also party’s magnificent performance in recent assembly elections.

“I never imagined that the party will win so many seats. That happened because Tejashwi got the support of all sections of the society,” he said.

He said the RJD rule was the “rule of the poor” and the people still believe only the RJD will bring an end to their problems.