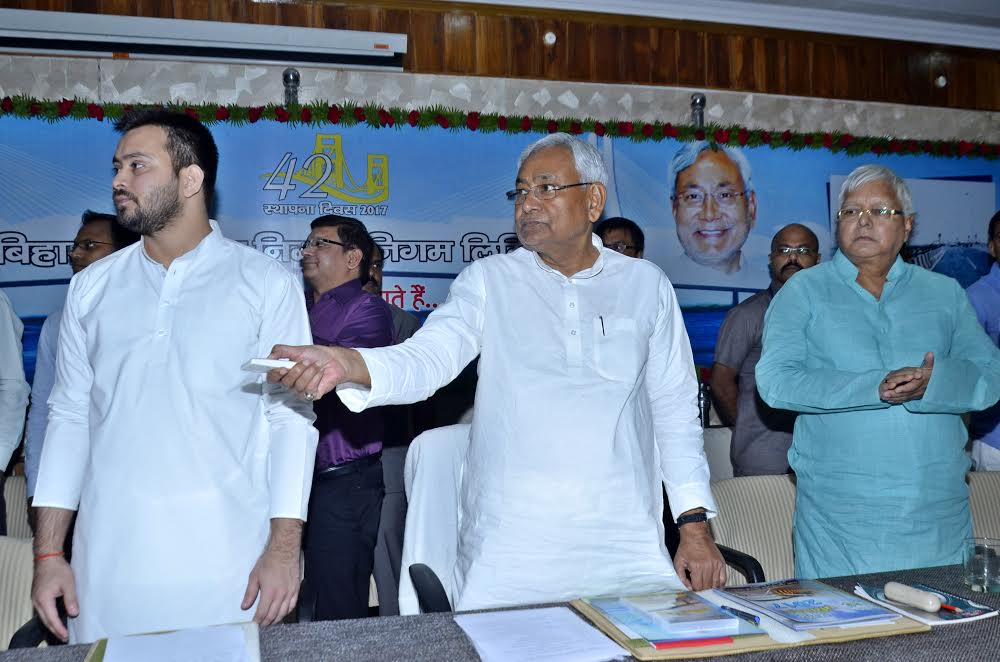 PATNA: It was November 24, 2005. Jitan Ram Manjhi had hardly reached his home after taking oath as a minister in the Nitish Kumar government when he got a call from the CM house. He was told to resign due to an old case pending against him. He did it soon.

Other ministers in the Nitish Kumar government, such as Ramanand Prasad Singh, Ramadhar Singh and Awadhesh Kushawaha faced similar treatments—they all were told to resign for old cases pending against them.

But, this time Bihar chief minister looks a different person. Even though the CBI has registered a formal case against his deputy Tejashwi Yadav and also conducted raids at his residence in a corruption case, the chief minister has been mysteriously “silent” over the issue.

ALSO READ: Lalu’s biggest challenge: How to keep his flock together

Reports said Kumar has been under tremendous pressures now that the CBI has made his deputy a key accused in a corruption case related to alleged gross irregularities in awarding tenders for maintenance of railway hotels.

Tejashwi is younger son of former railway minister Lalu Prasad whose RJD is a coalition partner in the ruling grand alliance government and only this made things difficult for Kumar.

The chief minister is facing pressures from the main opposition BJP to sack the deputy chief minister. Moreover, the chief minister himself has reiterated his “zero tolerance” stand against corruption and hence if he goes slow, his own credibility will be under doubt.

ALSO READ: Won’t sit idle until Modi is thrown out of power

But, there is also a risk involved in sacking his deputy. His government is running with the support of the RJD and if he dares to dismiss Prasad’s son from the cabinet, his government will be in danger since the RJD could withdraw its support.

Observers, however, are divided over the issue. A section of them say, Prasad now himself making the rounds of courts and his family also in severe trouble over corruption cases, he may not dare to bring down the government. Another section says there is no point in continuing support to the Nitish Kumar government when Prasad’s own family lands in jail.

A “worried” chief minister who is currently recuperating in Rajgir—he is suffering from viral fever— has called senior government officials to discuss how to tackle the situation. The chief minister has also directed his party spokespersons not to react over the issue of CBI raids at Prasad’s residence.

“The chief minister claims he has adopted zero tolerance against corruption and so this is a ‘test case’ for him. We expect him to break his silence and dismiss his deputy from his cabinet,” said senior BJP leader Sushil Kumar Modi.

“The CBI has made the deputy CM as an accused in the corruption case and conducted raids at his residence. How much evidence does he require to act against him?” asked Modi.

The BJP has also sought ouster of RJD chief’s another son Tej Pratap Yadav from the cabinet charging him with indulging in dubious land deals and not declaring his property as well as source of income in his poll affidavit filed with the Election Commission during the time of nomination filing.

Last week, a team of BJP led by Modi also met the EC and submitted a memorandum seeking cancellation of his House membership.

A series of such developments have kept the chief minister under pressures and it will really be interesting to see what would be his next move.