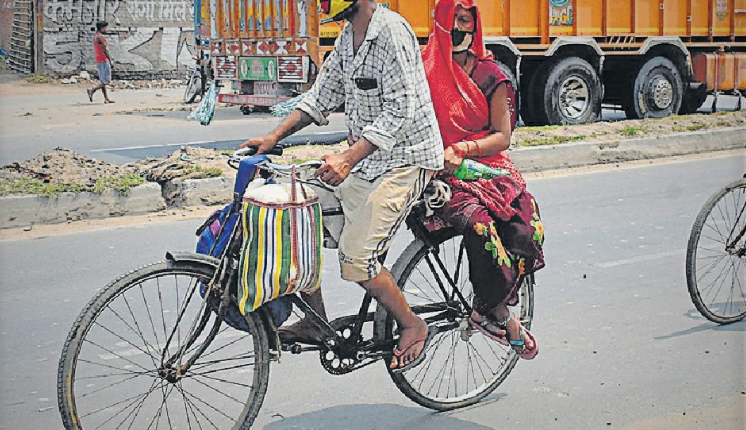 PATNA—Quite many things happen in our life and we ignore but this one was just unpardonable for them.

A migrant worker family underwent so much tortures of lockdown in their life that they have taken a vow never to migrate out of their home state of Bihar.

Bhamari Devi had only recently accompanied her husband Nathuni to Hooghly district of West Bengal where he worked in a toy factory.

Soon after reaching there, nation-wide lockdown was enforced and the couple got stuck. With their job gone due to factory closure, the couple came to the brink of starvation very soon.

In the next two months, they spent all their savings on buying ration or paying the rent of room they had hired.

With their survival going tough, they finally decided to return to their home in east Champaran district.

Last fortnight, Nathuni hung all his belonging from his rickety bicycle and left his home with his wife riding pillion.

Nathuni reached his home town earlier this week, covering some 700 km-long journey on his cycle in seven days.

More than the physical tortures, what hurt them the most was the insulting remarks of the local residents who rebuked them all the way, treating them as if they were “Corona bombs”.

“I have taken the Teesri Kasam (third vow). I won’t allow my husband to go out for work in future,” Bhamari says in an angry tone.

Her earlier two vows were that she wouldn’t bring her daughter to city’s slums and she too would not step out of the village.

Another such migrant worker Amit Kumar also faced severe torture and has decided never to go out for work. He hails from Gaya district of Bihar.

“The torture I underwent will never be erased from my memories,” says Amit, wiping tears from his eyes. He worked in a cotton mill factory in Surat.

He says the migrants were treated like dogs and untouchables after the lockdown was imposed.