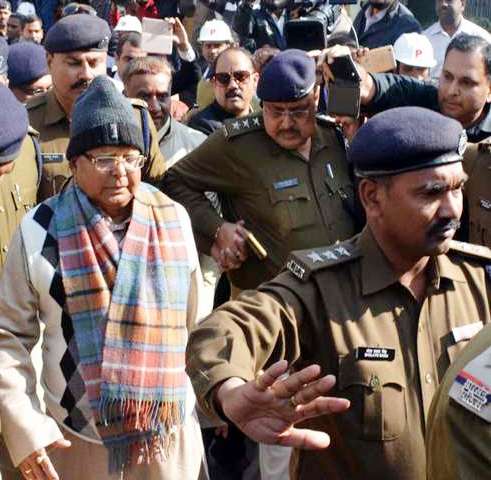 In addition to the jail term, Lalu Prasad has also been imposed a fine of Rs five lakh.

The court of Justice Shivpal Singh had on December 23 had convicted Lalu Prasad and five others and kept pending the quantum of punishment.

The case pertains to the alleged withdrawal of Rs. 89.27 lakh from Deoghar district treasury between 1994 and 1996.

Former Chief Minister Jagannath Mishra, who was among the other co-accused in the fodder scam case, was acquitted.

It was earlier supposed to be pronounced on 3 January but has repeatedly been getting rescheduled. The Special CBI Court Judge Shivpal Singh had told PTI on 4 January that he was getting phone calls from Lalu’s men.

Lalu Prasad has already been convicted by trial court and sentenced to five years jail term in Chaibasa treasury withdrawal case connected to the fodder scam.

For him the conviction in 2013 invited a ban on running for office.

‘Open jail and cow farming will be best for you’: Judge tells fodder scam convicts