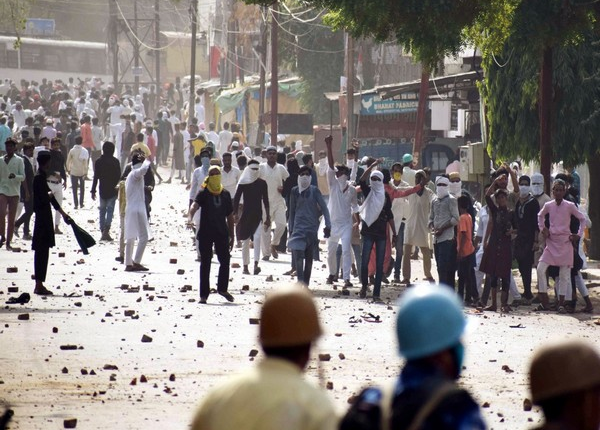 NEW DELHI—Massive protests were marked by violence in several parts of the country after prayers in mosques on Friday over alleged derogatory comments made on Prophet Mohammad by suspended BJP spokesperson Nupur Sharma and the party’s expelled media cell chief Naveen Kumar Jindal.

Incidents of clashes and arson were reported from Delhi, Maharashtra, West Bengal, Hyderabad, Punjab, parts of Uttar Pradesh, and several other places.

Violence and slogan-shouting were reported from Uttar Pradesh’s Prayagraj and Saharanpur when people began protesting against the former BJP spokespersons’ remarks and demanded their arrests.

Trouble began in Atala in Prayagraj after prayers the police tried to prevent the protesters from moving in different directions shouting slogans. Some of the protesters even resorted to stones pelting at the police personnel who retaliated with tear gas shells. In Saharanpur too, protesters shouted slogans seeking action against the former BJP spokesperson. Similar scenes were reported from Moradabad and Lucknow.

In Lucknow, thousands of protesters at the Tile Wali Masjid were prevented by the police from crossing barricades.

Incidents of violence were also reported from Jharkhand’s Ranchi and  West Bengal’s Howrah during the protests.

In the national capital, the Delhi Police said the situation was under control as adequate security arrangements were in place. They said after the massive protests broke out at the historic Jama Masjid in the city against Nupur Sharma and Naveen Jindal.

“People had gathered in large numbers for just 15-20 minutes, after which the crowd dispersed. The situation is now under control,” a senior Delhi Police official said.

Members of the minority community, soon after the Friday prayers, had gathered on the stairs outside the Jama Masjid holding placards against the now-suspended BJP functionaries. The agitators were demanding the immediate arrest of the suspended BJP leader.

“As the protest was done without any prior permission from the Delhi Police, a legal action will be initiated,” officials said.

Jama Masjid’s Shahi Imam Ahmed Bukhari said no call was given for the protest. “I don’t know who the protesters are.”

Pertinent to mention here that an FIR has also been lodged against Nupur Sharma and several others for their alleged hate remarks during a debate on a TV news channel.

Incidents of protests were also reported from Kolkata in West Bengal over the same issue.

In Kashmir’s Srinagar, protests were held at Lal Chowk, Batamaloo, Tengpora and other places in the city. A shutdown was imposed in Srinagar on Friday and mobile internet services were suspended after a curfew was clamped in Jammu’s Bhaderwah town the previous day due to communal tensions.

In Maharashtra, protests were reported from Solapur and Navi Mumbai while in Punjab, a large number of protesters gathered after the protest call by Ludhiana Jama Masjid. In Telangana, protests broke out outside Mecca Masjid in Hyderabad.

The Delhi Police, on June 7, said that they have provided security to the suspended BJP spokesperson Nupur Sharma after an FIR was registered on a complaint that she was getting death threats following her remarks on Prophet Mohammad.

“Sharma and her family have been provided police security after she alleged that she has been receiving threats and was being harassed over her remarks,” an official said.

The statement made by Nupur Sharma set off a global furor with several countries, including Afghanistan, Pakistan, Saudi Arabia, the UAE, Qatar, Kuwait, Bahrain, Indonesia, and Iran, as well as the Organization of Islamic Cooperation (OIC) officially protesting their statements and demanding apologies.

India, meanwhile, has maintained that the views belong to a few fringe elements only and do not represent those of the Government of India and “categorically rejected” the OIC statement slamming India as “unwarranted and narrow-minded”.