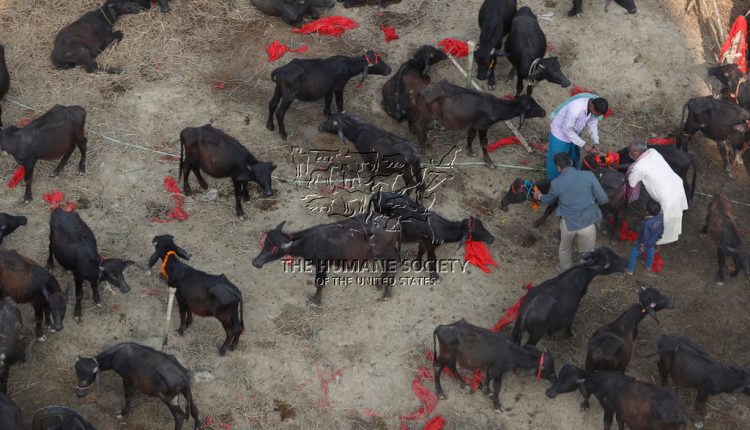 Gadhimai, Nepal– Animal campaigners from Humane Society International (HSI), India at the Gadhimai festival in Nepal claim to have have witnessed harrowing scenes of animal suffering as the world’s largest animal sacrifice event got underway in the early hours.

Scenes included baby buffaloes bellowing for their mothers as they watched them being beheaded in the Temple arena, and others collapsing from exhaustion, sickness and stress as devotees tried to drag them to their death.

Despite these deeply upsetting scenes, HSI says the combined efforts of animal welfare groups, faith groups and armed law enforcement at the India-Nepal border have resulted in many thousands fewer animals being slaughtered than at the same event when it last occurred five years ago.

Before the slaughter began, members of the HSI/India delegation pleaded with the Gadhimai Temple head priest, Mangal Chowdhury, to stop the killing but he refused to act. The priest’s inaction comes despite the Gadhimai Temple Trust having pledged to ban animal sacrifice in 2015 after the last festival took place.

As dawn broke today, an estimated 3,500 buffaloes were gathered in the main Temple arena for the mass beheading, most smuggled illegally across the border from India under cover of darkness.

Hundreds of young buffaloes have died in the past few days from sickness and exposure, but these numbers are vastly reduced from previous festivals.

Over the past year, however, animal groups such as HSI/India, HSI/Nepal, Federation of Animal Welfare Nepal and People for Animals have launched a series of public awareness campaigns to urge devotees not to bring animals, and this has proved successful for many devotees.

“Being here at the Gadhimai sacrifice is one of the most depressing and challenging experiences of my life. The suffering of these animals is so upsetting…Buffalo calves look on in bewilderment as their mothers are slaughtered in front of them,”  HIS, India’s managing director Alokparna Sengupta said.