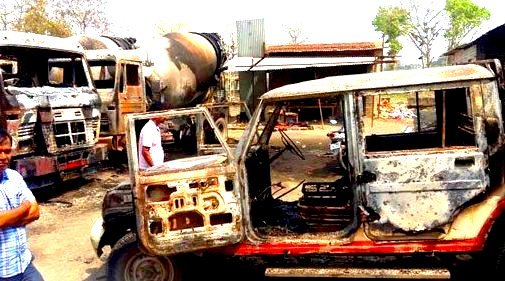 PATNA: Maoist rebels raided the base camp of a private construction company in Bihar late Friday night and torched at least 14 vehicles parked there, triggering wide panic in the areas.

Police said the rebels who were said to be around 50 in number raided the base camp of Hari Construction Company near Turki railway station in Muzaffarpur district post midnight and went on the rampage. The company is engaged in carrying out doubling works of the Muzaffarpur-Hajipur railway line.

Reports said the angry rebels first beat up the company staffs who were asleep at that time and asked them to leave the scene at once.

Once they left the spot, the rebels poured petrol on the vehicles parked in the camp areas and set them afire one by one. Soon they went up in flames. Police said some 14 vehicles were destroyed in the attack. Six staffs were also wounded in the attack.

Reports said the rebels also exploded a few bombs in the areas to cause panic before fleeing the scene.

The reason behind attacks is said to be the company’s failure to cough up levy as sought by the rebels. Meanwhile, the police have begun investigation in the case.

The incident comes barely three months after two engineers were killed by criminals over the same issue of levy collection.

Soon after the incident, Bihar’s deputy chief minister Tejashwi Prasad Yadav had announced to provide adequate security to the companies engaged in construction works in the state adding he would himself camp at the site to ensure the company completes its works. However, such announcements have failed to bring any change on the surface.