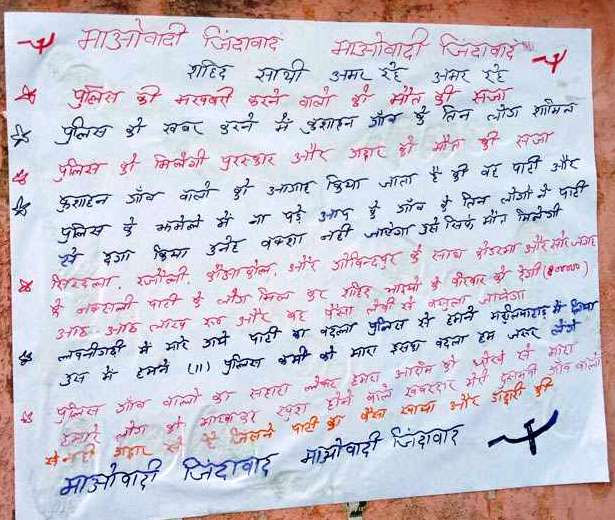 PATNA: Two days after the security forces in Bihar killed four rebels in encounter, Maoists have announced to avenge the “cold-blooded” killing of their comrades.

“Police killed our comrades by deceit. They need not be happy. We will avenge their killing soon,” the Maoists warned through hand-written pamphlets pasted on the wall of a school building in Nawada district today.

They have also announced to serve “death punishment” to three villagers who, they alleged, connived with the police.

“Three villagers ditched us and got our comrades killed by passing on information to the police. We will also serve them ‘death punishment’. We have nothing to do with the rest of the villagers,” the pamphlet mentioned.

The Maoists also announced a compensation of Rs 8 lakh (Rs 0.8 million) to each victim family. According to them, the said money will be collected through levy.

At least four Maoists, two of them being areas commanders, were killed in an encounter with the CRPF commandos in Gurpa forests in Gaya district on Wednesday.

The cops also recovered many arms and ammunition from the spot. This was the first major encounter with the rebels since the new year began.