Manu Maharaj: The moustachioed IPS official Bihar trusts the most! 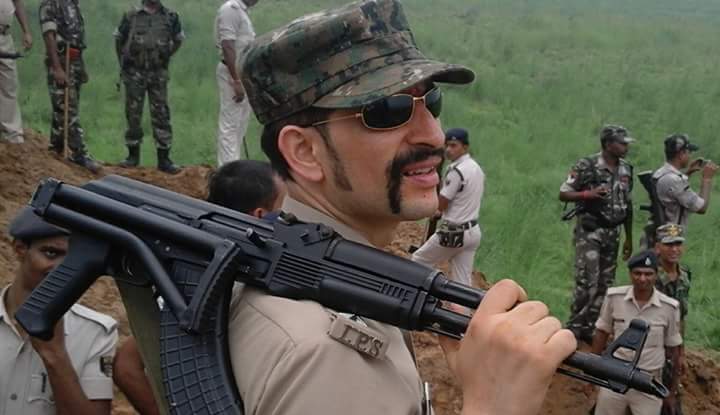 PATNA: Police in general don’t hold a very good image in the society for the kind of high-handedness, alleged indulgence in brutalities and charges of corruption.

The director general of Bihar vigilance bureau Ravinder Kumar himself has gone on record describing the police department as “the most corrupt” among all 42 government departments of Bihar.

Under this background, a young and dynamic Indian Police Service (IPS) official Manu Maharj now functioning as Patna’s senior superintendent of police really comes as a glimmer of hope.

The state government too trusts this super cop for the kind of his work efficiency, honesty and very good track record. And true to his image, he never disappointed the government as well.  In fact, the officer loves to play with challenges and this has made him the darling of all.

Come any problem and the government straightway rushes to Maharaj for help. This time again, Maharaj was asked to head the Special Investigation Team (SIT) formed to investigate the test paper scandal involving the Bihar Staff Selection Commission.

A fortnight after taking over the case, Maharaj has now almost cracked the case with the arrest of BSSC chairman Sudhir Kumar, a senior IAS officer, and his relatives. Taking technological help, the SSP has revealed how the kin of the chairman was involved in leaking question papers and answer keys.

He was again asked to head another SIT formed to probe the toppers scandal which surfaced in the class 12 examination conducted by the Bihar School Examination Board (BSEB) last May. This case too was cracked soon with the arrest of BSEB chairman Lalkeshwar Prasad.

The 4,000 page chargesheet was later filed against a total of 32 persons last year. Of the 32 charge-sheeted in the case, 20 were government employees and four were fake toppers while the rest were brokers.

Maharaj again proved his utility when he recovered the Delhi-based businessmen brothers Suresh Sharma and Kapil Sharma in October last year. The Bihar-based kidnapers who abducted the trader brother from the Patna airport had sought a ransom of Rs 4 crore (40 million) in lieu of their release.

Eventually, the SSP formed a police team, tracked the movement of the kidnappers and himself led a police operation at night leading to the recovery of the victims and arrest of some kidnappers. The victims were recovered from the dreaded Kajra hills in Maoist-infested Kahisarai district, about 160 km east of Patna. The kingpin of the gang was arrested later from Kolkata.

He proved his caliber again when the 10-day-long Prakash Parv celebrated in Patna to mark 350th birth anniversary of 10th Sikh Guru, Guru Gobind Singh passed off peacefully, thanks to the strategically-prepared route chart plan and deployment of forces. More than 500,000 Sikh devotees attended the function.

Maharaj who basically hails from Himachal Pradesh, joined IIT Roorkey for B Tech after completing his schooling education from Shimla. He was offered a plum job, but decided to not go for corporate sector, instead he started preparation for Civil Services Examination.

He cracked the UPSC in 2005. As per reports, he opted for the IPS job despite qualifying for the IAS as he wanted to become a police officer.

His best quality is the smile which he always wears on his face even during adverse circumstances. He generally avoids using harsh words against suspect.

His style of working too is quite unique. He rarely uses revolver and doesn’t believe in encounter.