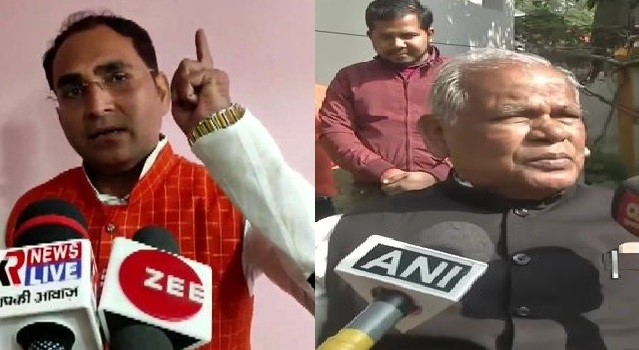 PATNA—A Dalit politician who allegedly used derogatory remarks against Brahmin priests has earned the ire of a BJP leader who announced a reward of Rs11 lakh for slitting his tongue.

Former Bihar chief minister Jitan Ram Manjhi set off a controversy by stating that Brahmins never look interested in taking foods in the homes of Dalits yet they have no issue with accepting money offered by the same hands.

Manjhi made these remarks while addressing a function in Patna in the weekend during which he also refused to accept Lord Ram as God and rather described him as a “fictional” character.

The developments, however, has now landed Manjhi in serious troubles as while the BJP leader has announced a reward for slitting his tongue, several cases have been filed in the courts.

“Whoever chops Manjhi’s tongue will be given a reward of Rs11 lakh. It’s too much. I am ready to face any consequences for the sake of the Brahmin community,” BJP leader Gajendra Jha announced on Tuesday.

“He is repeatedly making derogatory and abusive statements against Brahmins, which cannot be tolerated,” Jha told the media.

At the same time, at least five cases have been filed against Manjhi in different courts in the past two days. The cases were filed in Betia (West Champaran), Gopalganj, Samastipur and Chapra (Saran).

Manjhi heads Hindustani Awam Morcha (HAM) which is a part of the ruling NDA government in Bihar.

Train gets stranded midway as drunkard parks cycle on the track