Manjhi headed for Lalu-Nitish camp? Nothing official about this but he says ‘Politics is a game of possibilities’ 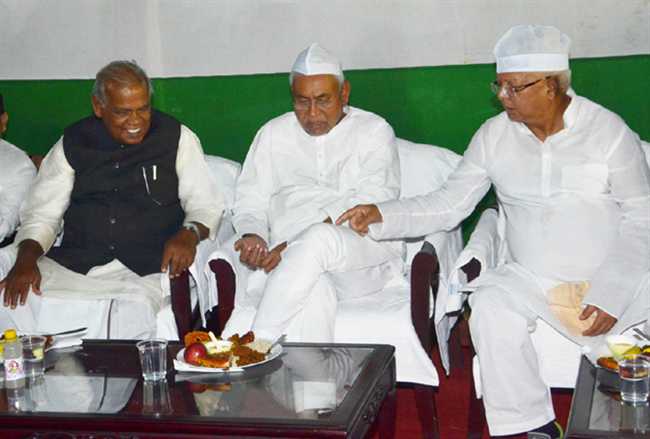 I’m a former CM only because of Nitish Kumar, says an ‘indebted’ Manjhi

PATNA: Time is a great healer.

The age-old saying proved true during a Iftar party hosted by RJD president Lalu Prasad in Patna on Friday evening when once sworn-enemies, Nitish Kumar and his predecessor Jitan Ram Manjhi, sat side by side and shared their experiences, forgetting the bitter past.

What was good Manjhi finally came to realize his folly after sometime and gave the impression that he would always be thankful to his mentor.

“It’s because of Nitish Kumar that I am a former chief minister,” Manjhi told the media, heaping praises on his mentor.

Manjhi further hinted about the new political alignments when he said “Politics is a game of possibilities”.

He also said the he keeps on talking with Kumar since he is the chief minister of the state.

“Politics is another thing and political decency is another,” he observed.

On his part, chief minister said meeting leaders, whether friends or enemies, is nothing unusual on such occasions.

“None should object to such meetings,” remarked Kumar.

Both the leaders had fallen apart and their relations soured after Manjhi refused to vacate the chair for Nitish who later got him expelled from the party.

Manjhi is currently said to be not sharing very good relations with the BJP which is accused of not giving due respect to its alliance partners.

This became evident when in March this year, three NDA partners, such as Lok Janshakti Party, Rashtriya Lok Samata Party and Hindustani Awam Morcha held a close-door meeting over lunch reportedly to discuss the issue of merger or form a new front.