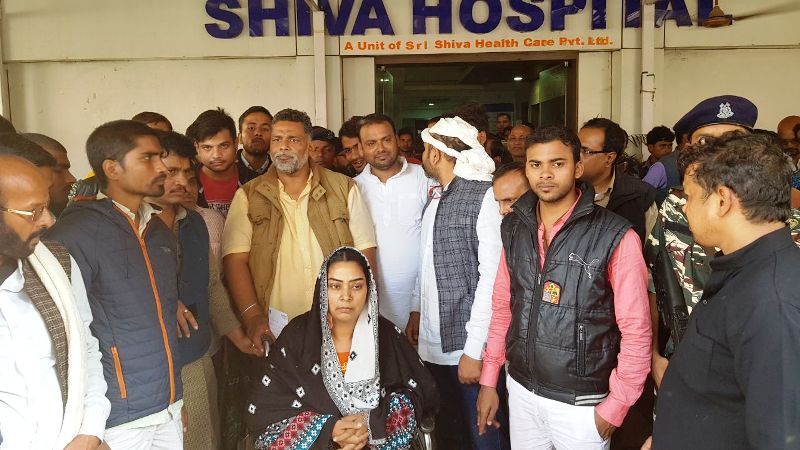 PATNA: Madhepura MP Pappu Yadav has emerged as a harbinger of hope for poor patients in Bihar.

Today again he rescued a poor woman Shama Perveen, a resident of Saharsa district, who had been allegedly held hostage by a private health clinic Shiva Hospital located in Kankarbagh locality of Patna, the state capital of Bihar.

The victim had been admitted there three days back with viral fever but the hospital charged more than Rs 4 lakh.

As per report, the hospital had held the woman hostage for the last two days for only Rs 10,000 after which Yadav rushed to the spot and rescued her. He also arranged an ambulance to send her back to her home.

On December 7, Yadav had rescued a body held hostage by Sharnum Hospital in Patna after the victim family failed to pay Rs 1.5 lakh as hospital treatment.

Shamina Khatoon, a resident of Sitamarhi district, had been admitted to the hospital after she fell ill but she ultimately died in course of treatment.

However, the hospital was demanding a heavy amount in lieu of handing over the body to the victim family when the MP stepped in.

He had rescued a poor patient admitted to a hospital on November 26 again. The woman Lalita Devi had been held hostage by Maa Shitala Emergency Hospital, another private hospital located in Patna, for failing to pay medical bills totaling around Rs 70,000.

Yadav also arranged an ambulance to rush the poor woman home in Madhepura district which is also the home Lok Sabha constituency of Yadav.