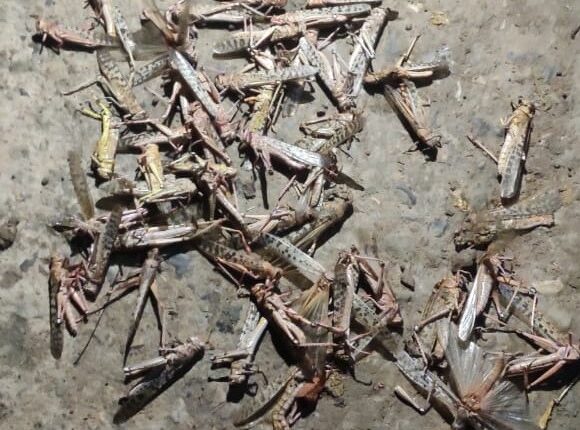 PATNA—A small swarm of locusts hit Bihar on Wednesday night but was promptly sent back by the authorities who sprayed chemicals on them.

Agriculture department officials said the locusts swam attacked Kochas block of Rohtas district on Wednesday night but as soon as they were noticed, a team of agriculture staffs sprayed chemicals on them as they fled.

“It seems the small swarm of locusts had possibly come from Pragraj (in Uttar Pradesh) to escape chemical spray on them,” Rohtas district agriculture officer Radhan Raman said by phone on Thursday.

He added some 20 percents of locusts were killed by chemical spray while the remaining fled.

Raman said locusts’ attack at this time may not cause much harm since the paddy had just been shown in the field while new leaves on Peepal and Shisham trees are already available in plenty for their consumption.

“They love to consume new leaves of this trees which taste sweet,” the agriculture officer said adding they were fully prepared to repulse the locusts’ attacks.