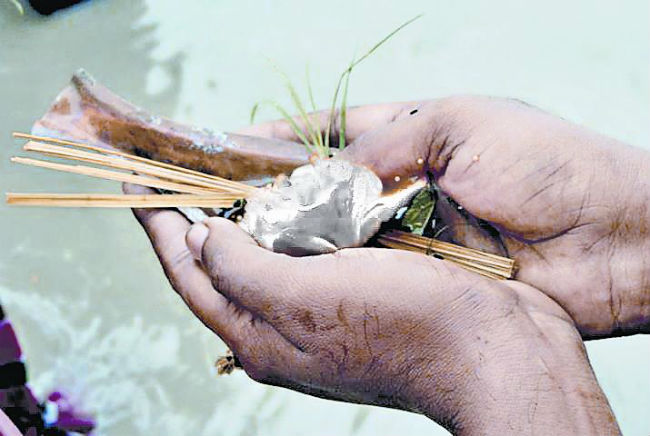 PATNA: Stepping up further attacks on his arch-rival the BJP, RJD chief Lalu Prasad has announced to observe “Shradh Diwas” (a kind of death rituals) on November 8 to mark first anniversary of demonetization drive launched by the ruling Narendra Modi government at the centre.

“Apart from observing Black Day and holding protest rallies, we will also observe November 8 as Shradh Diwas,” Prasad told the media today adding as many as 18 opposition parties would join his protest.

He alleged the three-year tenure of the Modi government failed to bring any cheers to the masses.

“It was claimed the demonetisation drive will end black money from the market, instead it has proved disastrous for the common men,” he alleged adding the BJP government had failed on all fronts.

The RJD chief says the note ban has brought untold miseries to all sections of the society. While small businessmen shut down shops, it left many jobless as the many industries got destroyed due to notes ban, Prasad has alleged.

A recent report of the Reserve Bank of India too revealed 99 percent of demonetized notes had returned to the banks.

“Subject to future corrections based on verification process when completed, the estimated value of SBNs (specified bank notes) received as on June 30, 2017 is Rs 15.28 trillion,” the RBI said in the report in August this year.

This is the second rally of the RJD in the past three months. Earlier in August, the RJD had held a rally against the BJP in Patna’s Gandhi Maidan.

Although the RJD claims the purpose of the rally is to highlight the demerits of the note ban, political experts say the move is aimed at keeping the flock of the party lawmakers together and getting them busy in party programmes till next general elections now that the party is out of power.

Another rally plan of the party comes barely two months after the RJD held a massive rally at Patna’s Gandhi Maidan in August which brought many opposition parties at a single platform.

The RJD chief is really upbeat at the success of the rally which drew huge crowd and wants to keep party tempo maintained till the next elections.

He is also apprehensive that the date of the assembly polls for Bihar could be advanced with the talks of holding elections of the Lok Sabha along with the state assemblies doing the rounds.

Failed in love, youth burns himself to death at girlfriend’s door in Bihar