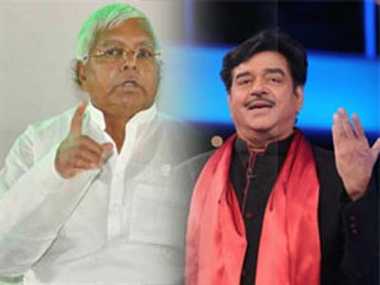 PATNA: RJD chief Lalu Prasad and BJP MP from Patna Shatrughan Sinha today stayed away from the Patna University’s centenary celebrations which was inaugurated by prime Minister Narendra Modi—a development which has not gone down well.

Both were alumni of the Patna university but were shabbily treated by the organized, reports said adding invitation letters were extended to them at the eleventh hour.

Reports quoting local media said the Patna University vice-chancellor Ras Bihari Singh extended invitations at the eleventh hour as a damage-control exercise. But by then, the two had already decided not to make it to the function.

While Prasad has been a vocal critic of the PM all these months, Sinha who represents Patna Sahib seat for the BJP appeared disappointed at the late delivery of invitation letter as explain a series of his tweets.

He added, “Dear Hon’ble PM @narendramodi . I once again welcome & salute you as Chief Guest of Centenary celebration of my Patna University. Finally even I got an invitation, alas very late and with a very short notice…delayed by the “more loyal than the King’s people” involved in the affairs”.

As for Prasad is concerned, he was served invitation letter only on Thursday, barely hours before the event was to begin.