Lalu names his son as RJD’s CM candidate, retracts after notes of dissent 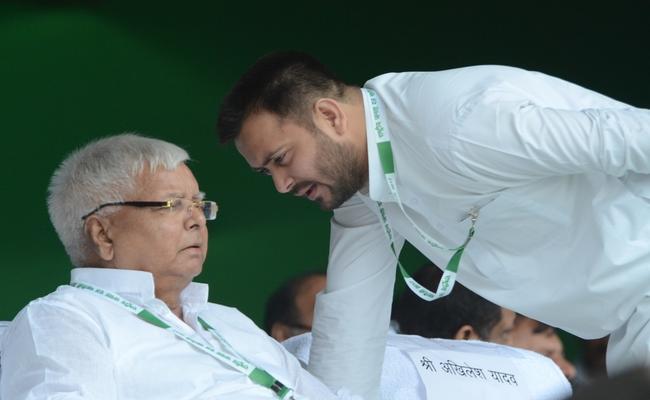 “Elections are still long away. We will decide over the issue on time. There is no dispute over it,” Prasad told the media on Friday evening.

Earlier on the day, he had declared that the next elections in Bihar would be fought under the leadership of Tejashwyi setting at rest speculations as to who will be the party’s chief ministerial candidate in the next state polls due in 2020.

Tejashwi who turned 28 on Thursday was the deputy chief minister in the previous Grand Alliance government headed by chief minister Nitish Kumar. Apart from this, he also held three important portfolios.

“The RJD will contest the next polls under the leadership of Tejashwi. I am not saying this because he is my son but because he is young, energetic, suave, talented and has good leadership quality,” the RJD president told a Press conference in Patna on Friday.

He said now is the time for youth and his party was focusing on youth force. “We have planned to give top priority to youths both in ticket distribution and handing charge of the organization,” he declared.

The announcement comes shortly after the state RJD president Ram Chandra Purve at party’s state council meeting held earlier this week sought for projecting Tejashwi as party’s chief ministerial candidate describing it as the “common sentiments of the party workers”. At the meeting, Purve had said the next government would be formed under the leadership of Tejashwi.

However, a note of dissent came from RJD national vice-president Raghuvansh Prasad Singh who said the issue of chief ministerial candidate was “premature” and that “good leadership” should be allowed to emerge by the time the state goes to polls.

“Everybody is free to air his views in public but I think it is the masses who will decide over the issue,” Singh said. He added their endeavour was to work for the people of Bihar.

“They are our ‘malik’ (master). It is the people who will put a stamp of approval on who should be the Chief Ministerial candidate”, Singh opined.