Lalu in no mood to tolerate his ‘unrestrained’ elder son 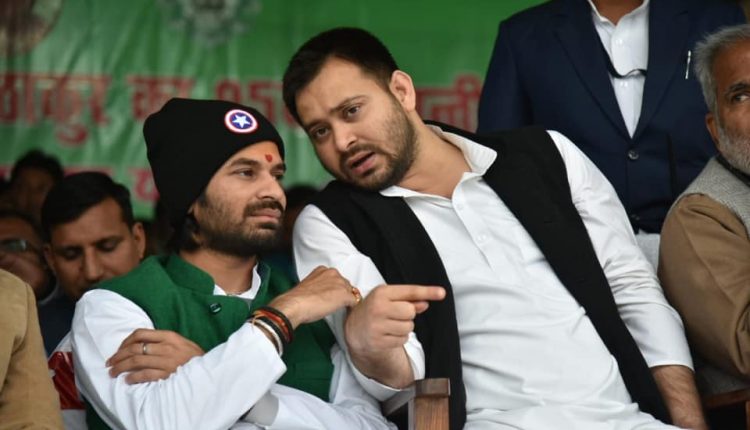 PATNA—RJD president Lalu Prasad has been caught in a peculiar situation with his both legislator sons—Tej Pratap Yadav and Tejashwi Yadav—caught in a bitter power struggle, dealing a blow to party’s prospects. However, neither Prasad nor his family is in a mood to tolerate “unrestrained” Tej Pratap, their elder son, anymore.

Reports said Tej Pratap wants adequate “share” in power, causing a fresh worry for the party leadership. An angry Tej Pratap has even threatened to declare a war if he was not given the “justice”—at least five villages to cite his quote from Mahabharata! But, his family has ignored his demand so far.

The family and his party are rather worried over his frequent “nuisance” act which, they say could cause extensive damage to the RJD which fared exceptionally well in the recently-held state assembly polls when the party bagged as many as 75 seats and emerged as the single-largest party in the Bihar.

The credit for this magnificent performance goes entirely to Tejashwi Yadav who single-handedly launched extensive poll campaign in the absence of his father who was in jail at that time and was able to impress the voters with his oratory skills.

Sources said the RJD chief now doesn’t want to spoil party’s chances by going soft towards Tej Pratap and wants to convey a strong message to the party workers by initiating some harsh actions against his son so that none could dare to break party’s discipline.

How Tej Pratap has even lost support of his family can be underlined from the fact that his sisters too are repeatedly advising him to maintain party discipline at all cost.

“Tej Pratap has been curtly told not to spoil the chances of Tejashwi Yadav through his antics. The family is no mood to give him any concession. Even RJD supremo Lalu Prasad Yadav himself did not take notice of Tej Pratap,” a RJD leader said adding “Laluji may even throw him out of the party if he didn’t mend his ways”.

The remark irked Singh so much so that he stopped visiting the party office for over a week and even declined to unfurl the national flag on Independence day.

Singh relented only after he was given the authority by the national chief to act against those breaking the party discipline and giving opposition the chance to take potshots at the RJD.

“Tejashwi Yadav is a leader of the opposition which means he is the chief ministerial candidate. None can compete with him,” Singh has said.