‘Lalu a grassroot leader. It’s no surprise if he sits on ground’, ask minister sons 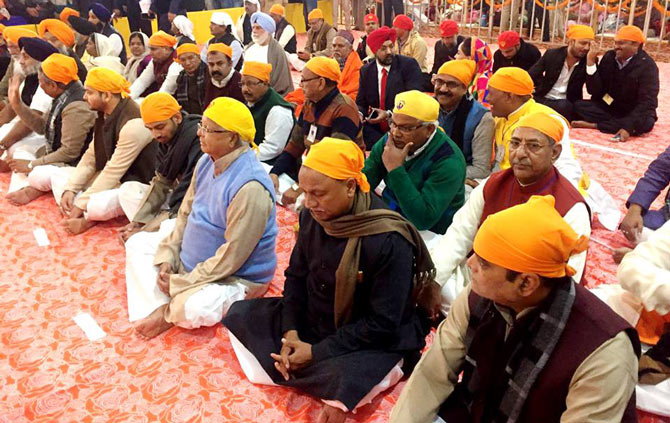 PATNA: A day after the seating arrangements made for RJD chief Lalu Prasad during a religious event kicked up storms in the political circles, his children today sought to play down the issue, terming it as “insignificant”.

During the concluding day function of Prakash Parv attended by Prime Minister Narendra Modi, the RJD chief was seen seating on the ground along with the audience, sparking protests from the RJD. The function held to commemorate the 350th birth anniversary of 10th Sikh Guru, Guru Gobind Singh was organized at Patna’s Gandhi Maidan.

“Lalu Prasad is a grass-root leader and so, it’s not a surprise it he sits on the ground,” explained his son Tejashwi Prasad Yadav who is a deputy chief minister in the ruling Nitish Kumar government in Bihar.

“Moreover, people sit on the ground in the Guru’s court,” he added.

Prasad’s another son Tej Pratap Yadav too brushed the issue aside saying people prefer to sit on the ground in God’s abode.

“Prakash Utsav was a religious event and hence Lalu sat on the ground. It’s not an issue where he sits. We have no objection,” added Yadav who is a health minister.

Prasad’s seating arrangements had kicked up a lot of controversy after he was seen seating on the ground while at least two Union ministers and chief minister Nitish Kumar were seen sharing dais alongside the Prime Minister during the Thursday event.

The move invited strong protests from a section of RJD which sought to portray it as “insult” of Prasad.

“The people didn’t like this. They were amazed to see that how Laluji was seated in the audience. The chief minister should have ensured his seating arrangement at the dais alongside the Prime Minister,” was how RJD vice-president Raghubvansh Prasad Singh reacted to the incident.

Singh said it is the “mahagathbandhan” (Grand Alliance) government ruling the state now.

“Hence every leader of the alliance should have been there on the stage but it seems only the JD-U government is ruling the state,” he said.