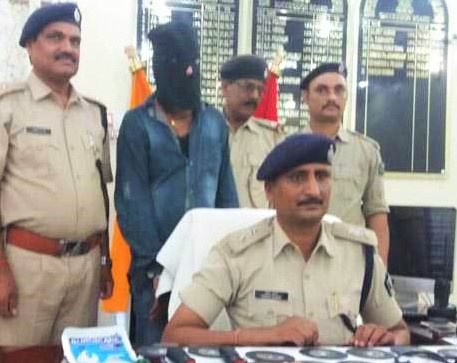 PATNA: A psycho killer who confesses to killing as many as 20 persons was today arrested by the police in Bihar.

The gangster Avinash Srivastava alias Amit, son of a former lawmaker, fell into police net while trying to commit robbery in a nationalized bank in Mahua areas of Vaishali district Monday afternoon.

The gangster along with his accomplices had entered into the bank branch masquerading as ‘kanwanrias’ (Hindu pilgrims) when the police was informed of the incident. In subsequent action, the dreaded gangster was caught while his accomplices managed to escape.

“All the criminals had come dressed as kanwarias (Hindu pilgrims) to rob the bank but were caught”, a local district police official Rakesh Kumar told the media today adding the police also recovered arms and ammunitions from the arrested criminal.

The gangster who did his post graduation from Jamia Millia Islamia university in Delhi and also worked for a leading company like Infosis told his interrogators that he had entered into the world of crime to avenge the murder of his father Lalan Srivastava who was killed in 2002.

In 2013, he killed his father’s assailant in a brutal manner. He had pumped 32 bullets into the victim’s body, according to police.