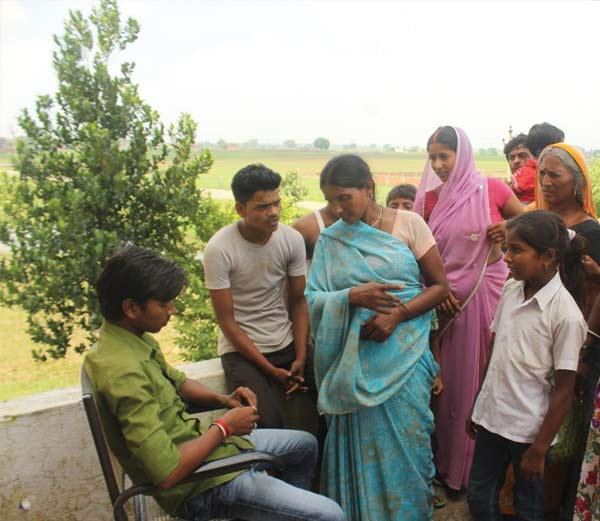 PATNA: After initially looking confused, ‘Kanhaiya’ has finally gone with his mother Rinku Devi—the woman who gave birth to him.

Curtains fell down on the 48-hours-long drama after hundreds of villagers led by a local Mukhia and Sarpanch confirmed Rinku Devi is actual mother of Manish Kumar.

But, before leaving his adopted mother, he didn’t forget to touch her feet and seek her blessing.

The boy touched her feet, showered love on her and promised to visit her at intervals as local villagers watched all these with moist eyes.

“Will keep visiting you at regular intervals…Can’t leave you alone. Please take care,” said an emotional Manish, sitting in her lap and clutching her tightly.

The boy was united with his lost parents in the presence of the local police and local village council heads.

The problem began when two women came face to face, staking claim over him, leaving the boy confused.

According to story given by Rinku Devi, wife of Lalan Rai from Masurhi, his son had lost his family on October 21, 2011. He didn’t return home after he left for a local school located at Kailuchak village.

As the family failed to trace him despite much effort, they finally registered a missing case with the Mausaurhi police station on October 29. The police too failed to get any whereabouts about him.

The story took a new turn on Friday when the woman had come to the house of one of her relatives at Janipur village in Patna district.

In course of conversation, she came to know that a local woman Anita Devi has adopted a boy who had got detached from his family some seven years back.

Within no time, the woman reached the house of Devi at Nagawan village and identified her son. Soon she asked the woman to hand over her son but she refused.

As the matter appeared causing tension in the areas, the local police soon stepped in and brought both the women to the police station.

On being quizzed, Anita Devi admitted to having adopted the boy but added she loved him much more than her own son.

Boy’s story reminds the tale of Hindu mythological character Lord Krishna who was born to Devaki but it was Yashoda who brought him up.

Indian ‘Osama’ survives on kidney donated by a Hindu