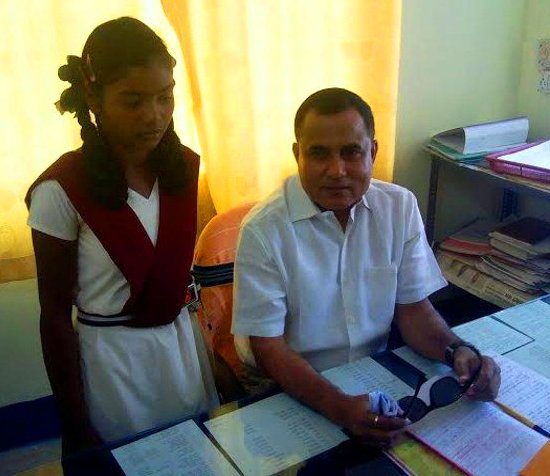 PATNA: This is something which gives a very pleasing experience, and amply indicates how a social revolution is silently taking place in the country’s hinterland.

Authorities in neighbouring Jharkhand state were pleasantly surprised when a 15-year-old schoolgirl Sakina Kumari reached them with a different request—to stop her marriage and allow her study further. The girl is enrolled in an upgraded government middle school in Simdega district.

Sakina, a little tribal girl studying in class eight, didn’t wish be married so soon yet her parents fixed her marriage with a boy from Chhattisgarh and even printed the wedding cards. Her marriage was scheduled to be solemnized later this month on April 30.

She requested her parents to defer her marriage plans for few years and also sought helps from her neighbours but to no avail.

Eventually, she reached the school with a printed wedding card of her marriage in bag on Wednesday and narrated her whole problems to the teachers.

After hearing her problems, her class teacher Brahmdutta Nayak accompanied the schoolgirl to the office of Simdega district superintendent of police (SP) Rajiv Ranjan Singh and sought his interference in this regard.

“Sir, I don’t want to get married so soon, I want to pursue my studies further and get a job,” the girl told the SP.

Impressed by her requests, the SP sent a police team to the girl’s native village at Kullukera, seize the wedding cards and stop her marriage. He also ordered for registration of a case against her parents under the child rights acts.

“From now on, the district administration has become the guardian of the girl. We will take all care of the girl. We are quite impressed at her bold initiative,” the SP told the local media on today.

A similar incident had been reported earlier this year in Jharkhand when another teenaged girl Mamata Kumari reached the District Legal Services Authority (DLSA) soon after completing the marriage rituals at home and sought helps for stopping her wedding. The authorities instantly acted on the requests of the sobbing girl, a class nine student from Ghaghara High School in Gumla district.

She contacted the DLSA authorities barely a day before her marriage scheduled to be held on February 4 this year.

It so happened that the DLSA had organized a legal awareness camp at her school on January 27 at which the students were informed about the Child Marriage Prohibition Act. She was one of the participants.

Well knowing that her parents were violating the laws, she contacted the legal services authorities and finally got her marriage stopped.

Recently in May last year, another teenaged girl Dolly Kumai met chief minister Raghubar Das and sought his help to stop her wedding. Reports said the chief minister who was holding a meeting with his officials at that time was so moved by her resolve that he instantly called up her father and requested him to defer her marriage plan for now.

Deaths due to liquor ban in Bihar: Did chief minister Nitish Kumar really have good intentions or he acted in haste?