Jail security beefed up as thousands wait outside to meet Lalu 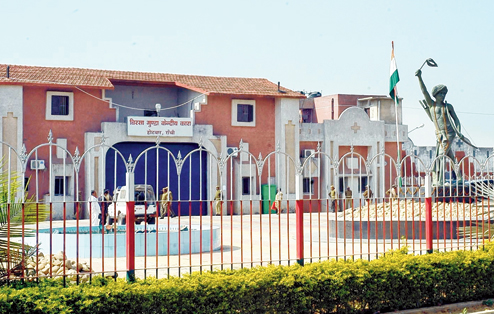 PATNA: The security of Ranchi-based Birsa Munda central jail neighbouring Jharkhand state was beefed up on Monday with a huge crowd waiting outside the jail for the past three days to meet their leader Lalu Prasad, national president of the Rashtriya Janata Dal (RJD) who is lodged there. Prasad was sent to the jail on Saturday after being convicted in the multi-million dollar fodder scam.

Keeping in view the crowds of the Prasad’s supporters, the jail authorities have made additional deployment of 100 policemen outside the jail and also put up a barricading some 500 meters away from the jail gate to prevent the crowd come near the jail.

What has baffled the authorities is the way the corruption taint on the RJD chief has failed to deter his supporters who want to have a glimpse of their leader whom they see as “the messiah of the poor” and refuse to accept the court’s judgment.

During the shifting of Prasad to jail from the court after his conviction as well, a poor woman cried bitterly in the court premises and fainted.

“How will I bear with this? I can’t pass nights in my home while my leader stays in jail in this chilly winter. This is gross injustice to him,” was how she cried.

Witnesses said the crowds of Prasad’s supporters have been waiting outside the jail in the bone-chilling cold for the past 72 hours to get their turn and meet their leader in jail even as the jail authorities have announced only three people will be allowed to meet Prasad in a week. Many have gone there from far-away places in Bihar and Jharkhand, reserving buses or small vehicles.

“We have come from Madhepura (in Bihar) and want to meet our leader but the authorities say only three people can meet him in a week. How can they prevent us from meeting our leader? He is not a thief or murderer… He is the leader of the poor who has been framed in false cases,” one of Prasad’s supporters told the media outside the jail.

On Sunday, angry supporters created ruckus outside the jail after the authorities didn’t permit them to meet their leader. They shouted slogans like “Jail ka fatak tutega, Lalu Yadav chhutega (Lalu Prasad will come out as the gate of the jail will eventually broken open).

Apparently under pressure from the impatient crowd, the authorities allowed five persons to meet Prasad in jail on Monday. “The jail authorities should allow his supporters to meet him every day. He is not a terrorist or extremist, he is only a victim of politics,” Jharkhand’s party chief Anapoorna Devi told the media on Monday soon after meeting the party leader in jail. She charged the state government with victimizing Prasad’s supporters.

Prasad was sent to jail on Saturday after being convicted by a special Central Bureau of Investigation (CBI) court in a fodder scam case relating to fraudulent withdrawal of Rs8.45 million from a local treasury. The quantum of punishment will be announced on January 3 next year.

The case against him was registered in 1996 while Prasad was serving as the chief minister of Bihar. He, however, quit the throne and appointed his housewife Rabri Devi—totally divorced from politics—as his successor before going to jail in July 1997. She remained on the throne for the next eight years until the RJD was defeated in 2005 state elections and the NDA came to power.